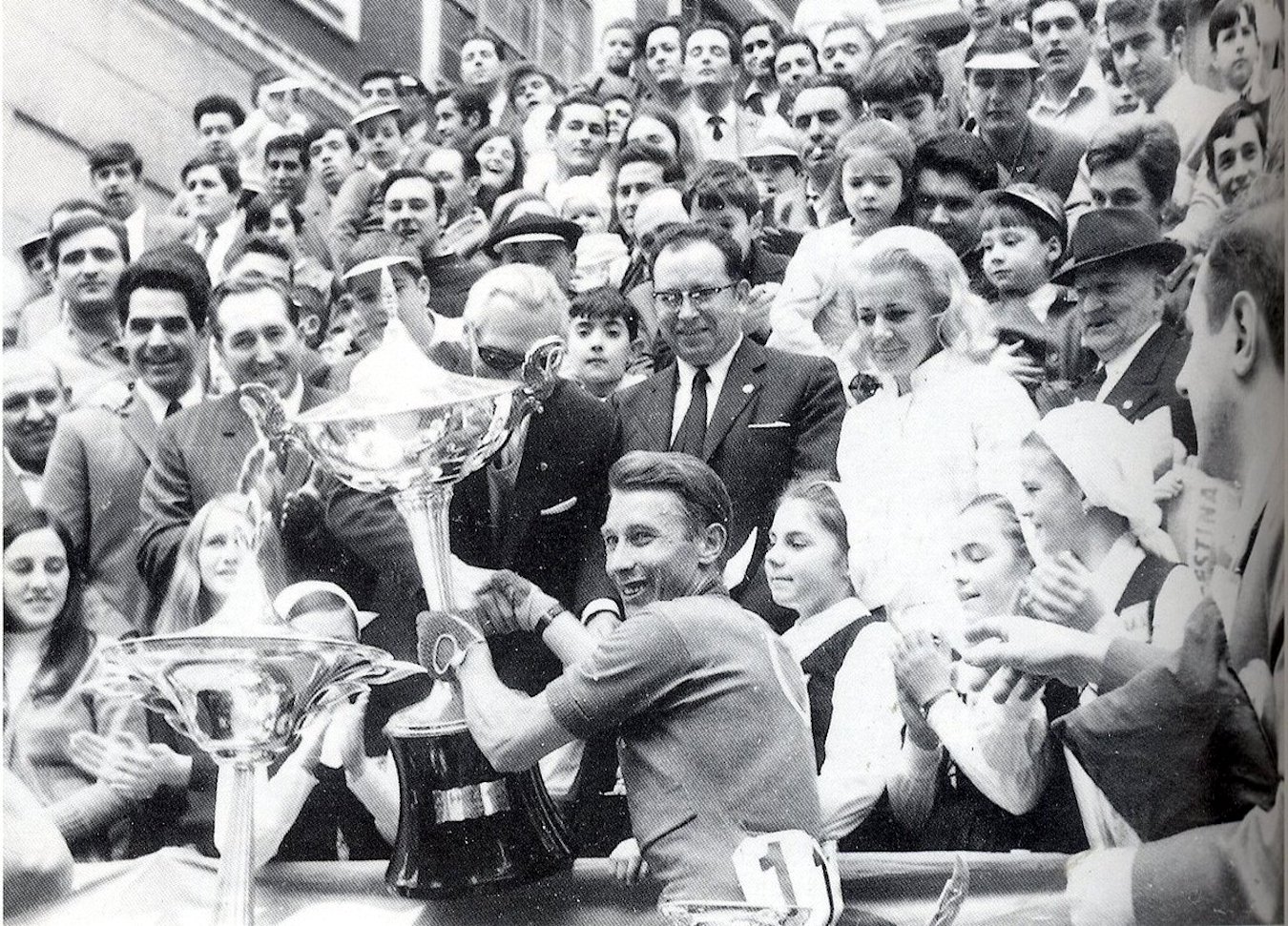 The 1969 edition of the Itzulia Basque Country, then known as the Vuelta al País Vasco – the Tour of the Basque Country – is not only remembered for its rebirth, 35 years after the last edition won by Italy’s Gino Bartali in 1935, but also because it was the last success in the extraordinary career of another cycling legend, Jacques Anquetil.

Five Tours de France (1957, 1961, 1962, 1963, and 1964), two Giro d’Italia (1960 and 1964) and one Vuelta a España (1963), the UCI Hour Record in 1956, nine editions of the Grand Prix des Nations, the Gent-Wevelgem in Flanders Fields, Bordeaux-Paris and Liège-Bastogne-Liège: the palmarès of ‘Maître Jacques’ is one of the brightest and richest in cycling history. Born in  Mont-Saint-Aignan, France, in 1934, Anquetil – also known as ‘Monsieur chrono’ – dominated the period between those two other incredible champions, Italian Fausto Coppi and Belgium’s Eddy Merckx.

The sunset of Anquetil, the sunrise of Merckx

As Jacques started the 1969 season he was aware it was the sunset of his career. The memory of the prestigious Trofeo Baracchi win the previous year, with Felice Gimondi, was already fading. In Paris-Nice he finished third in the general classification behind Merckx and fellow Frenchman Raymond Poulidor, but he suffered the humiliation of being caught – for the first time in 16 years – during the last short uphill time trial to Col d’Èze by The Cannibal. He then said to the press: “Nous sommes entrés dans l’ère Merckx”, “We are entering the Merckx era.”

Around one month after the Course au Soleil, Anquetil was one of only 39 riders ready to race the reborn Tour of the Basque Country thanks to the merging of two competitions: the Vuelta al País Vasco and the Bicicleta Eibarresa. Four teams showed up in Eibar on April 16th: the Spanish Kas and Fagor and the French Bic and Mercier. Despite his age, Jacques shared the role of favorite with two of his most fierce rivals, Poulidor and the Spaniard, Luis Ocaña.

The last win of ‘Maître Jacques’

The first stage to Vitoria (185km) went to Anquetil’s team-mate, the Briton, Michael Wright. As early as the second stage to Pamplona (after 203km) the general classification became a six-man game after the breakaway, with some of the favorites, arrived with more than seven minutes on the rest of the group. The winner and new leader was Spain’s Joaquin Galera, who finished ahead of his compatriots Gregorio San Miguel and Eduardo Castello. Anquetil was the only ‘foreigner’ in the lead group, crossing the line after Mariano Diaz and in front of Francisco Gabica, five seconds behind Galera.

Luis Ocaña partially recovered from the day’s big difference before winning the next day’s 171km third stage to San Sebastian. The next day the menu offered two half-stages: Anquetil earned the lead in the morning race to Gernika after 118km – won by the Frenchman Raymond Riotte after a powerful breakaway. And he protected the jersey in the afternoon with third place in the 43km individual time trial to Bilbao, which was won by Poulidor ahead of Ocaña. In the last stage, 171km to Eibar, won by the Spaniard Domingo Perurena, Jacques claimed 7th place in the group of the favorites.

Without stage victories, Jacques Anquetil won the 1969 edition of the race with a 32-second gap to Francisco Gabica, 40 seconds to Mariano Diaz. Ocana finished 6th at 3’59” and Poulidor in 7th at 4’08”. Of the 39 starters, 36 finished the 891km race. It was the final victory of one of cycling’s most ‘beautiful pedaling machines’.

His last race was on December 27, 1969, not in France but in Antwerp, Belgium – yet he didn’t get the attention he deserved. As the French sport newspaper L’Équipe wrote, he raced “to the great indifference of the media”. With some irony he then became correspondent for L’Équipe, he worked with Europe 1 and Antenne 2 channels, and was Race Director for Paris-Nice and Tour Méditerranéen. Anquetil was Sport Director of French national teams at UCI World Championships, and became a member of the Managing Committee of the Fédération Française de Cyclisme.

He spent the last part of his life in northern France, surrounded by nature, in a castle formerly owned by Guy de Maupassant at Le Domaine des Elfes, La Neuville-Chant-d’Oisel. The place is 17km far from Rouen, the city where he died from cancer, aged only 53.

After this last race in 1969, Jacques Anquetil rode the bike just three more times: during the  Grand Prix des Gentlemen in Nice, with some friends in Normandy and with his daughter for her birthday.