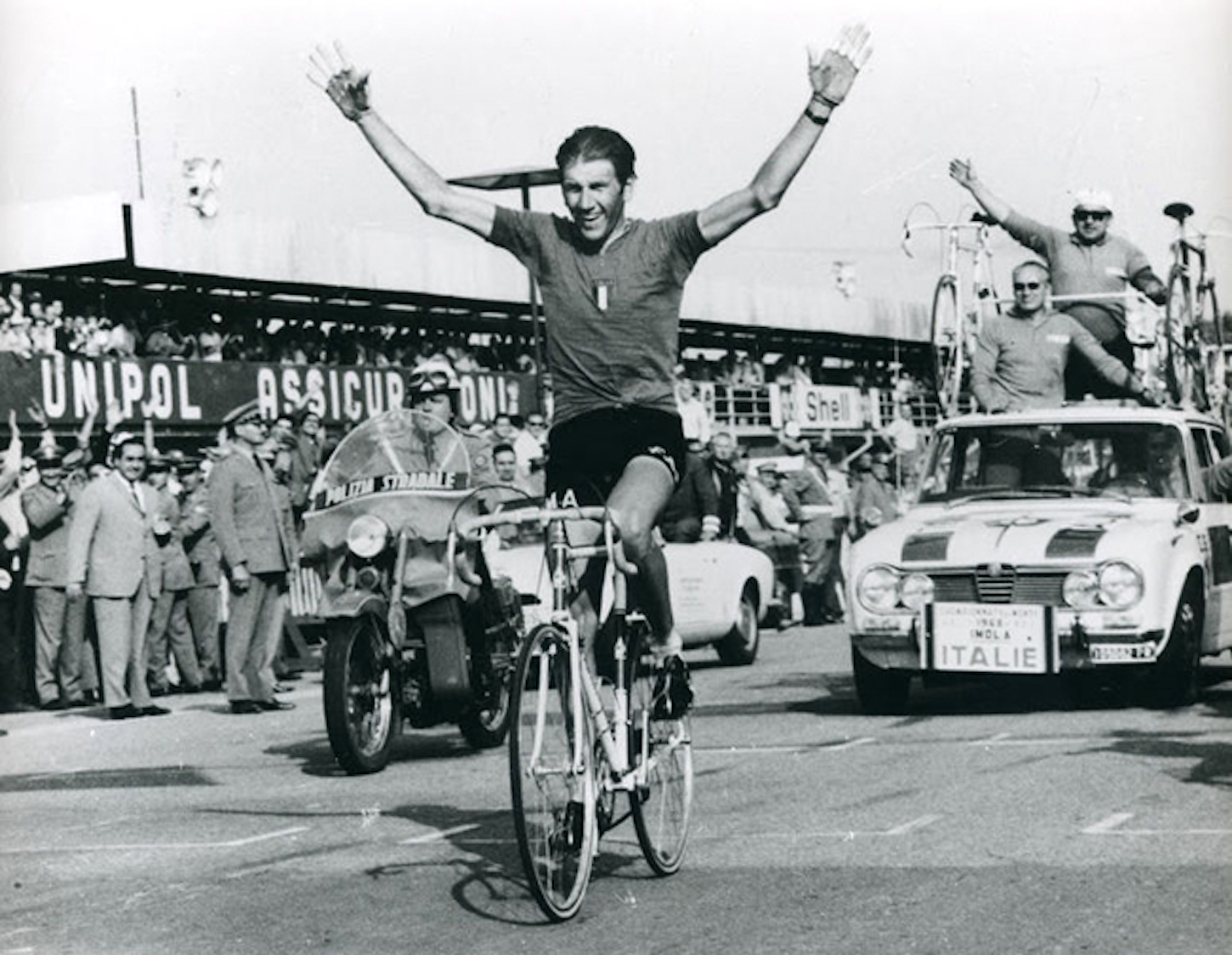 It was 2:43pm on a torrid September 1, 1968 when Vittorio Adorni went solo on the Frassineto climb in an attack that seemed to have started too far out. There were still 90 kilometers to the finish of the UCI Road World Championship in Imola, on just the 13th of 18 laps of the ‘Tre Monti’ circuit which ended in the prestigious racetrack now known as Autodromo Internazionale Enzo e Dino Ferrari.

On the steep slopes of the most demanding climb, Adorni had attacked on the third lap together with one of the favorites for the rainbow jersey, the experienced Belgian Rick Van Looy, who had already won two consecutive UCI World titles, one edition of Milan-San Remo, two Tours of Flanders and three Paris-Roubaix Classics, along with Liège-Bastogne-Liège and the Giro di Lombardia.

“I looked at him, he looked at me. He attacked and I followed him,” Adorni said. “There were still 230 kilometers to go. A madness.”

It quickly became an elimination race, only 19 of the 85 riders who started in the morning were still on the course in the final part, with Adorni in front and everybody else chasing. The small peloton had a dominant Azzurro colour, given the presence of Felice Gimondi, Gianni Motta, Michele Dancelli, Vito Taccone and Franco Bitossi. The most active of the chasers was the defending UCI World Champion, a 23-year-old Belgian who had learnt from Adorni himself how to race in a Grand Tour, showing in that year that he was not just a one-day specialist. His name was Eddy Merckx.

“They had an idea of a mixed team between Italians and Belgians, which was called ‘Faema’,” explains Vittorio Adorni, who won the 1965 Corsa Rosa.  “I told Eddy: ‘I’ll help you win a small race’ and it happened in Sardinia at the beginning of 1968. I felt like the one who created the atomic bomb!”

At the Giro d’Italia, Merckx and Adorni were co-captains and room-mates: “Merckx had to first ask me permission to attack. “‘No’, I kept telling him, ‘No’. He turned his head so much during the race that I gave him a stiff neck! At the Tre Cime di Lavaredo I let hime off the leash: he won, put on the pink jersey and then got the Giro.” Ahead of Adorni himself. On the eve of the UCI Road World Championship, in Italy there were concerns that Vittorio could still act as a team-mate for the young champion.

No way. Adorni had a lead of 3’40” on the 13th lap which he increased considerably to 6’55” by the following lap, before pushing it to 8’17”, then 9’12” by lap 16. And by the time there were 26km remaining, it was easier to measure his advantage in distance: he had 6km from the small peloton pulled by a furious Merckx, closely marked by Gimondi and the other Italians in a group which included the Frenchmen Raymond Poulidor and Jacques Anquetil, Germany’s Rudi Altig, and the other Belgian, Herman Van Springel.

While the chasing group kept switching between hard accelerations and blocking actions by the Italians, Adorni – with a white hat on his head and the number 74 on the back – continued steadily in his attack, propelled by the 300,000 Italians crowded along the roadside of the 15.4km circuit, screaming “Italia! Italia!“.

Vittorio was born in the province of Parma and has always been passionate about opera. “My favorite is Giuseppe Verdi’s La Forza del Destino – ‘The Power of Fate’ – which is the one that pushed me that day in Imola. Usually, whoever attacks first is then caught. But I ate a lot of micro-sandwiches and I stayed focused trying lap after lap to recognize the faces of the spectators and guess what  banners would be around the bend.”

The last lap was fully controlled by the Italians, including Motta, who had wanted to retire but held on. On the final climb of Frassineto, Adorni passed without his white hat and the crowd overflowed from the racetrack’s stands to welcome the future rainbow jersey. There were less than 4km to go when the bells tolled for 5pm, by which time Adorni had already been alone for 2 hours and 15 minutes.

He covered the final meters on the circuit tasting victory, lifting his hands from the handlebars, sending a kiss to the sky and raising his hands to his face. He became UCI World Champion after 7 hours, 27 minutes and 39 seconds at a formidable average speed of 37.169 km/h. He hugged his wife Vitaliana and then Fiorenzo Magni as the audience invaded the finish line.

Meanwhile, the group still had almost half a lap to complete, Merckx tried one last time but was caught by Gimondi. Then Van Springel went solo and the Italians let him go: he got the silver medal, arriving 9’50” after Adorni, the widest gap in a UCI World Championship road race in modern times. Four Italians arrived together with Dancelli taking the bronze, 10’18” down, ahead of Bitossi, Taccone and Gimondi. Merckx could only finish eighth.

Vittorio Adorni ended an Italian drought of ten years since Ettore Baldini’s victory in Reims in 1958. And it was Baldini’s rainbow jersey that Vittorio wore in a kermesse in France the day after his Imola success, having not received the official jersey in time. He retired in 1970 after winning 60 races and wearing the pink jersey of the Giro d’Italia for 19 days. He went on to work in TV, as a Sports Director and then as President of the Professional Cycling Council and member of the UCI Management Committee from 2001 to 2012.