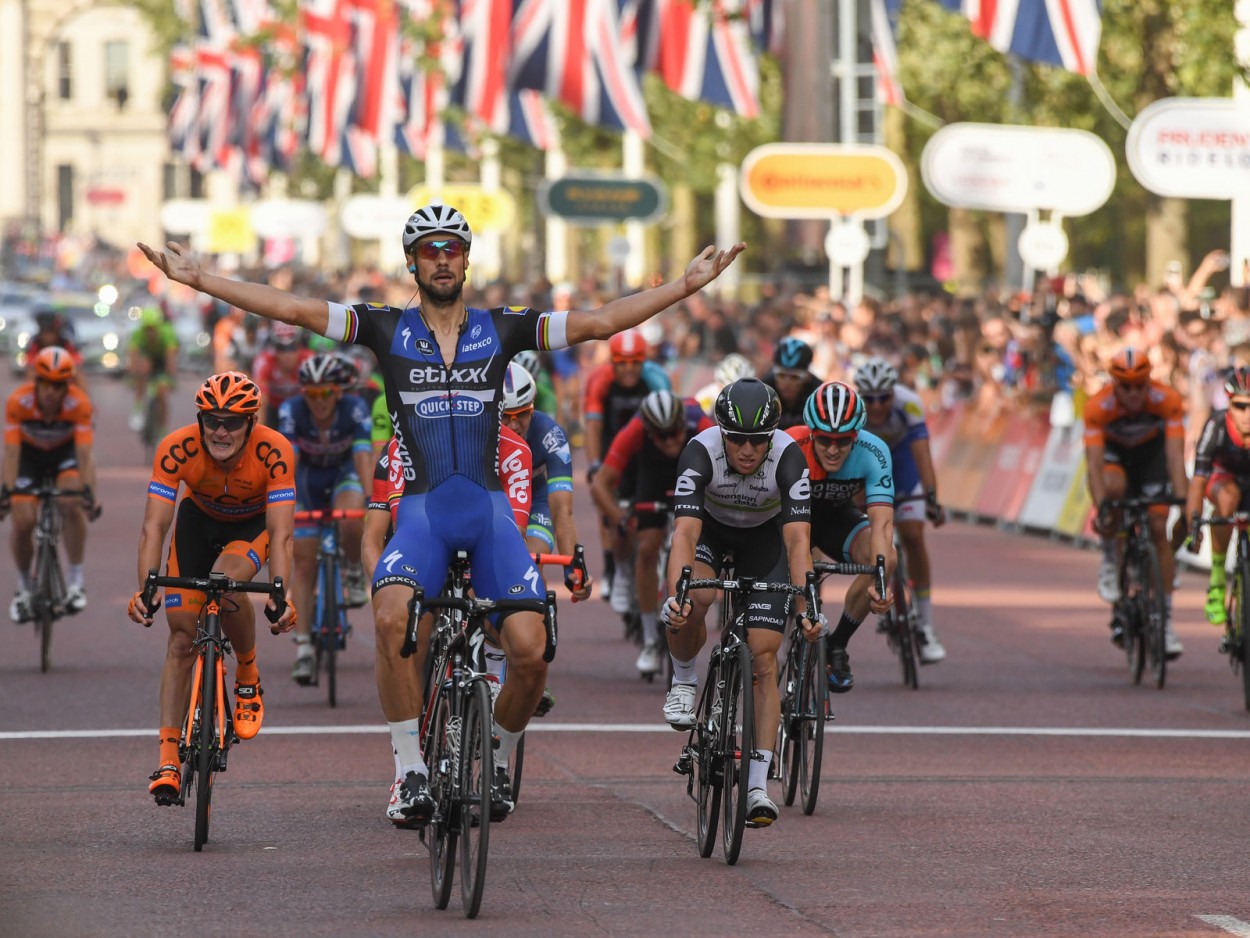 Tom Boonen (Etixx-QuickStep) continued his great start to the second half of the season by riding to a dominant win in the biggest British one-day race – the RideLondon Classic.

After a great solo ride by Team Sky’s Geraint Thomas was neutralized by Orica-BikeExchange and Boonen’s Etixx-QuickStep teammates, the Belgian rider Belgian rider succeeded in finding a gap that allowed him to power past Mark Renshaw (Dimension Data) and Michael Matthews (Orica-BikeExchanage) during the final few meters.

Thomas had built up a considerable lead, which at one point stretched out almost three minutes over the peloton – with 25 kilometers to go.

However, the Sky rider, who had attacked from a seven-man breakaway group with 50 kilometers remaining, quickly began to fade as the peloton organized its chase.

The catch would eventually be made during the final few kilometers, as the race entered central London.

During the sprint Boonen timed his acceleration to perfection, moving to the far right-hand side along the wide finishing straight well ahead of Henshaw.

Boonen’s victory was especially impressive considering, given the fact that the Belgian rider had suffered a puncture earlier in the race, and was  later was dropped on the hilly circuit in the middle of the race.

Despite these setbacks, his Etixx-Quick Step team helped him make his way back up to the peloton, then chase down Thomas and the other remnants of earlier breaks to bring everything back for a sprint finish.

Earlier in the race Team Sky had made it their mission to animate the proceedings.

With just over 90km to go they made their first move, with Thomas and Ian Standard attacking, along with Patrick Bevin (Cannondale-Drapac).

The Welsh rider committed to his move and built a lead that became stable at around the one minute mark.

With 14 kilometers to go, Ian Standard (Sky) attacked on Wimbledon Hill, making it possible that two Sky teammates might ride together to the finish.

However, by this point the peloton had really started to close in, as they caught the rest of the break, quickly followed by Stannard, and finally Thomas.

From there was an attack from Sonny Colbrelli (Bardiani-CSF) in the closing stages, but the peloton ensured that everything came down to a sprint finish.