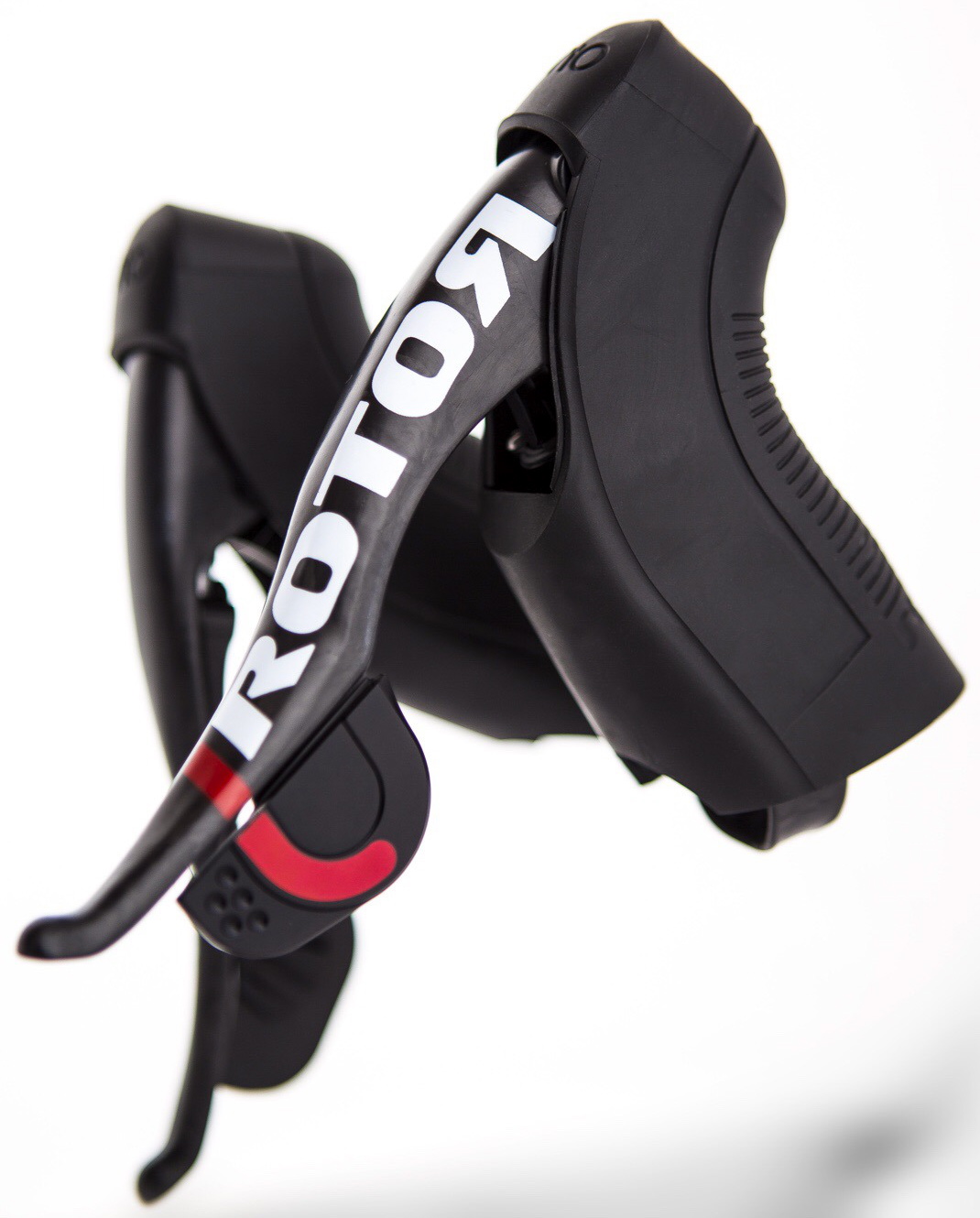 After months of speculation and spurious details emerging here and there about ROTOR’s all new, secret groupset, the Spanish brand finally unveiled some detailed images about its skunkworks hydraulic groupsset today – called the UNO.

While the details are still forthcoming, according to ROTOR, the UNO is a fully hydraulic system involving both brakes and shifting.

However, in the case of shifting, only one paddle shifter on the brake lever is required, by virtue of its short and long throw actuation to change gears.

In addition, the oversized body on the top of the front derailleur and the back of the rear derailleur, is what purports to house the groupset’s ratcheting mechanism.

We suspect it won’t be until EuroBike, that the full details of the UNO will be released, but until then, ROTOR did issue the following press release today.

ROTOR Bike Components hopes to capitalize on its worst kept secret about a debut groupset from the Spanish brand when the 24th annual Eurobike throws open its doors next week. After six years in development, ROTOR UNO will publicly stake a claim as the first complete road groupset with hydraulic actuation shifting and braking. By partnering with Magura to produce ROTOR UNO’s brake systems (both disc and rim), ROTOR will leverage more than a century’s-worth of expertise in hydraulic brake systems. ROTOR UNO´s Eurobike debut precedes its global product launch scheduled for spring 2016.

“Our initial idea was to improve upon existing shifting systems; we knew that our system was a small step forward with its increased precision compared with other cable-actuated systems but we still suffered the same disadvantages of those systems, like friction, devolving inconsistent force over time, and other inconveniences,” said Pablo Carrasco, co-founder and chief innovation officer for ROTOR. “We knew that disc brakes for road were about to become a reality and we challenged ourselves to further the concept and apply hydraulics to actuate shifting as well.”

Hydraulic technology had already been implemented in the areas of brake and suspension systems; ROTOR sought to apply that same technology to shifting. ROTOR UNO seized its prerequisites from popular groupset features but ROTOR wanted to radically improve upon those features in a manner inline with the company’s vision to lead through innovation. Smooth activation, low maintenance, multiple shifting positions, both rim and disc hydraulic brake options, internal hose routing, and low “ride” weight emerged as key characteristics integral to the state-of-the-art groupset.

“Hydraulic systems are already something we use everyday without thinking twice,” said Carlos Cartón lead engineer for the ROTOR UNO project, “in car brakes, construction equipment, and airplanes. So it made sense to apply this proven technology to bicycle transmission, where the advantages are really clear.”