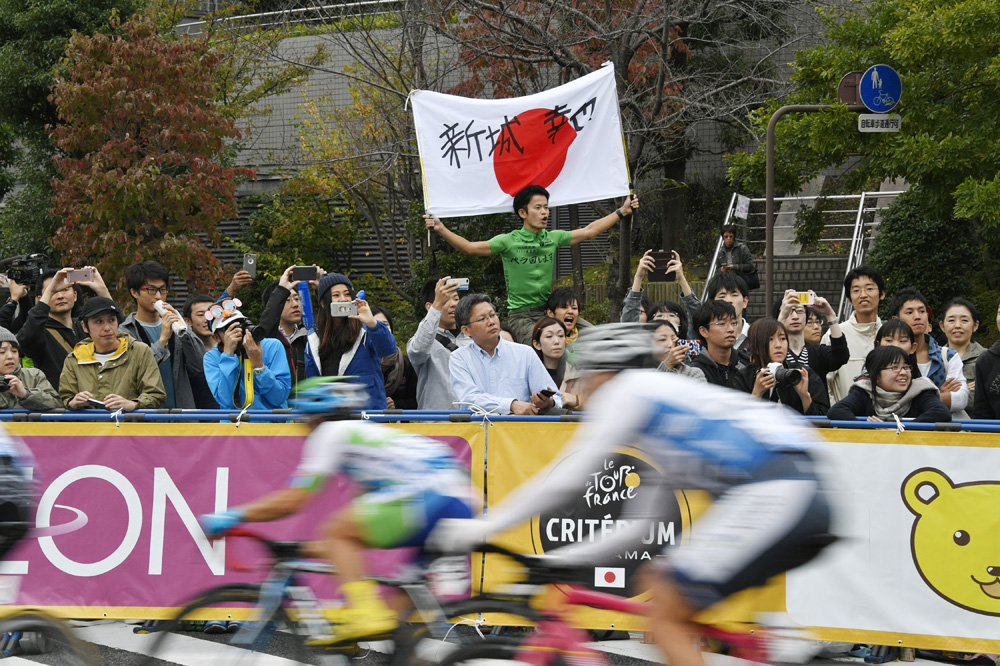 The 26-year-old Slovakian rider, who retained his world road race title earlier this month, tweeted it’s a “great feeling to win the Saitama Criterium,” which was held in Saitama, north of Tokyo.

In the final lap, sprint king Marcel Kittel, who won the Japanese road circuit race in 2014, jumped ahead of Sagan, Froome and Japanese rider Sho Hatsuyama.

Sagan and Hatsuyama caught up with Kittel before the last stretch to fight in a one-on-one duel, but Sagan raced past the local favorite to cross the finish line.

“It was a very fast start,” said Sagan. “A breakaway got caught, another one started. Eventually the race became a bit more quiet so I waited for three or four laps to go to make my move because I knew I’d suffer too much if I bridged the gap on all the attackers. We rode strongly at the end. I was the fastest of the four so it went well for me.”

Hatsuyama, however, was not glum over his second-place finish, saying: “I was so excited. It was a very much precious experience for me to race with so many world-class racers.”

Froome, who finished ahead of Kittel to secure the podium, expressed his gratitude to Japanese fans, tweeting: “Fantastic support out on the roads of Saitama.”

The 62-kilometer (38-mile) race around a 3.1 kilometer street circuit is organised by ASO, the same company that holds Tour de France.

On his first outing since the World Championships, Peter Sagan was not able to wear his rainbow jersey but did total justice to the green jersey he has won five times at the Tour de France. The Slovak waited for the penultimate of 19 laps of the Saitama circuit to launch an attack before powering away from an elite lead group featuring Chris Froome, Adam Yates and the Japanese national champion, Sho Hatsuyuma. After a season full of highs including wins in the Tour of Flanders and Tour de France stage victories, Sagan carved a new entry in his palmarès in Japan. On the Tour de France honours board, his green jersey was claimed by Marcel Kittel, while Romain Bardet snared the mountains jersey.

An era of cycling history drew to a close this morning in Saitama! With no drums or fanfare, merely a carefully calibrated solemnity, Bernard Hinault ended his career as Tour de France ambassador, saluted by a guard of honour formed by the crème de la crème of world cycling. “It would just be a dream to achieve what he achieved,” admitted Chris Froome, in the knowledge that that particular summit was inaccessible. “He’s a living legend – images of his wins were everywhere as I was growing up,” said an admiring Romain Bardet, who nonetheless didn’t ride his first bike until a decade after Hinault’s last Tour win in 1985. With the same aplomb as when he hung up his wheels in 1986, the tough Breton left the stage on a waspish note after a last lap of the Saitama circuit: “The old geezers are back in the hutch, now it’s time for the young guns.”

And so it proved, because it was the two-time Japanese junior time trial champion who lit things up as the race programme got under way. A solid rouleur, Kento Omachi not only got one over on his Japanese elders, but also kept the Tour de France riders at arm’s length, including the very best of them. With his yellow jersey looking a little tighter on him than in July, Froome had to settle for 7th fastest, 6 seconds slower than Omachi, while Petr Vakoc set the best time by a “pro”, 2 seconds behind the 18 year old. The peloton then got down to business in the points race, giving the bigger Japanese names the chance to shine in front of their home crowd. Thanks to a breakaway initiated on the very first lap, Yukiya Arashiro started racking up the points in the first two intermediate sprints. Even when he was swallowed up by the peloton, the rider from Okinawa had enough in the bank to sit back a bit in the last few kilometres. On the line, despite a charge from Marcel Kittel, his mission was accomplished: “It’s great, it worked,” said a delighted “Yuki” after his success. “And that’s the second time this year that I’ve won on home roads, after my stage win at the Tour of Japan in May.”

The battle for points also animated the early stages of the main race. And for once, Peter Sagan refrained from contesting the intermediate sprints, granting this little privilege first to Samuel Dumoulin, and then Marcel Kittel. At the same time, Romain Bardet was settling down to the task of amassing mountain points to claim a polka dot tunnel climber’s jersey! At this point, the World Champion was still keeping his powder dry, even allowing Fumiyuki Beppu to scent victory in a solitary raid that gave him a 15-second advantage on the pack with 5 kilometres to go. Then the five-time Green Jersey pulled rank. Adopting a similar tactic to the one that served him so well in Montpellier in the summer, Chris Froome, this time accompanied by Adam Yates, got into Peter Sagan’s slipstream for a four-way finale that also featured Sho Hatsuyuma. Even sporting his jersey with the red rising sun, the Japanese champion stood little chance against the power unleashed by “Peto” in the last 350 meters.The Slovak ended his year displaying the strength and class that have set him apart all season.