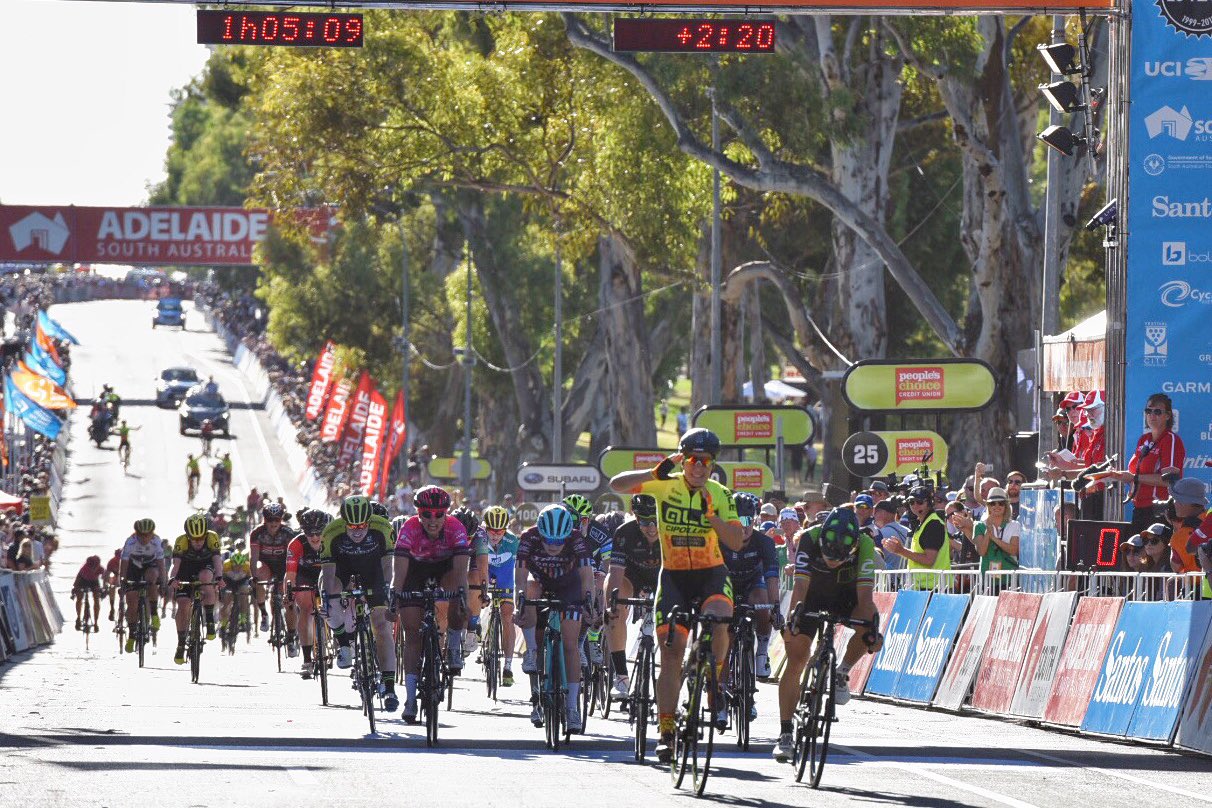 Mitchelton-SCOTT’s Amanda Spratt has survived a scare on lap eight to claim her second Santos Women’s Tour Down Under general classification in a street race finale won by Ale Cipollini’s Chloe Hosking.

Hosking’s fluoro yellow-clad teammates mobilized to the front of the peloton on the final lap, giving her the perfect opportunity to launch to the line and claim the stage.

Spratt, who earned Ochre on the back of a commanding performance into Hahndorf on Saturday’s grueling third stage, made history as the first to claim multiple, and consecutive, Santos WTDU titles.

She went into the straightforward 20-lap criterium with a comfortable 29-second buffer over her nearest rival Lauren Stephens (Cylance), and a further 90 seconds back to

In a straightforward 20-lap criterium, Spratt’s lead was ultimately – and unsurprisingly – unassailable, but the champion encountered a hairy moment in the dash to the line of the Subaru Prime on lap eight, when a pack of riders crashed down Wakefield Road.

While she was able to avoid the initial carnage, she was collected by riders behind and felled.

“I actually had time to stop, but the people behind me didn’t see it and someone zoomed into the back of me,” Spratt said.

“I was very shaken up, but my team was awesome: Jess Allen stopped, Annemiek stopped (Van Vleuten) just calming me down.”

Straight off the bike, Spratt admitted the feeling of claiming victory in the Santos Women’s Tour Down Under was still sinking in.

But claiming victory filled her with pride, having competed at the first women’s national series races at Tour before the emergence of the UCI-graded Santos Women’s Tour Down Under in 2016.

“I think I’ve been in Adelaide for every (women’s) edition at the Tour Down Under – even when it was a bunch of criteriums – so I feel like I’ve grown with the race as well.”

“Just to see it grow like this, it’s special, and it’s a really important race for Mitchelton-SCOTT.”

“There’s so much support here too. I love the crowd that’s getting behind it.”

“I’ve heard it been said, but this event isn’t that far off from being WorldTour.”

The race was otherwise uneventful, with former national champion Katrin Garfoot and her UniSA-Australia team mobilising to secure her all four primes and the southaustralia.com Sprinter’s Jersey.

Spratt also claimed the Subaru Queen of the Mountain classification on the back of her stirring climb against Lauren Stephens in Saturday’s Stage 3 at Comet Mine.