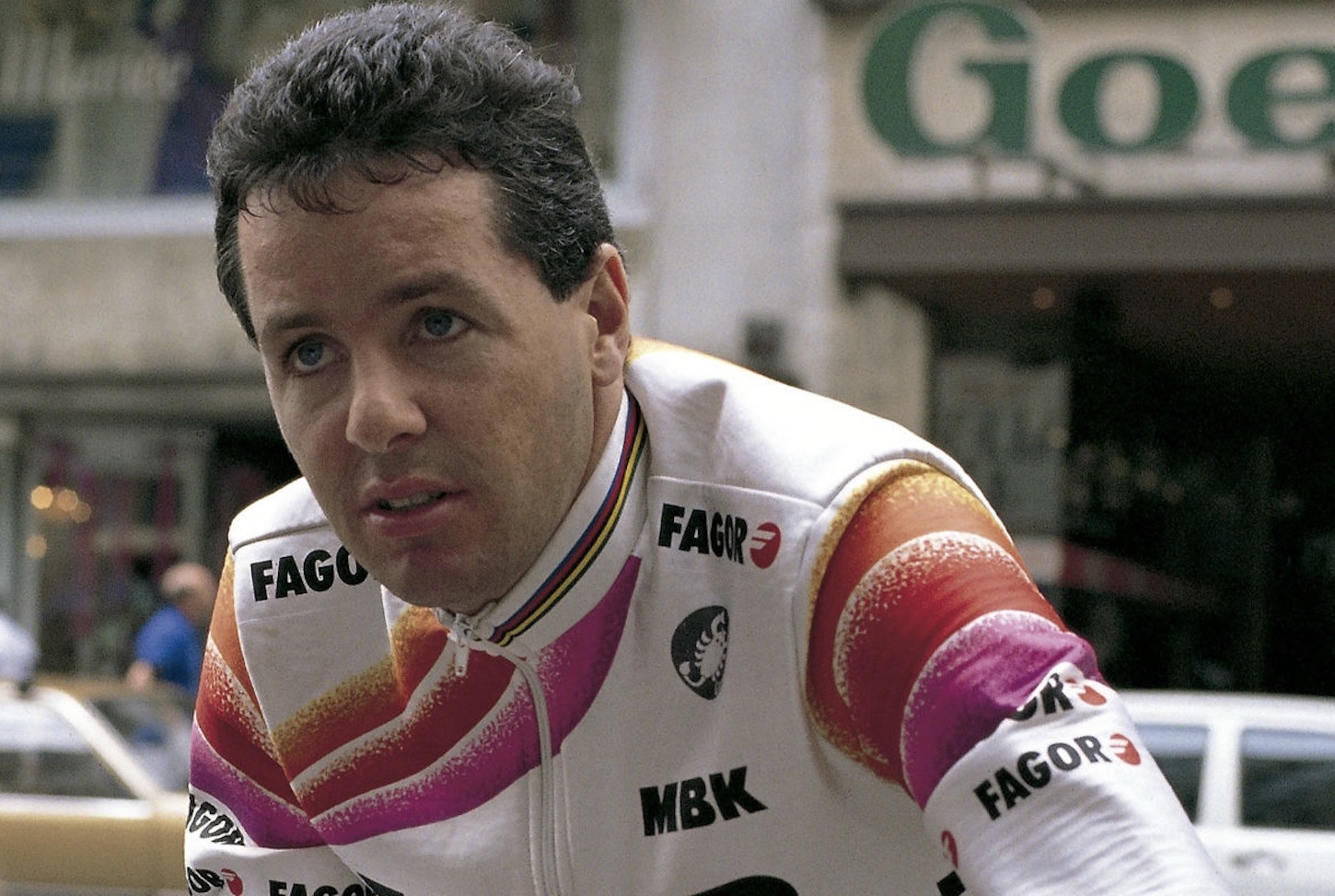 A belated happy birthday to Stephen Roche, who was born on November 28, 1959.

After completing his apprenticeship as a machinist at a local dairy in Dublin, and following a successful amateur career in Ireland, which included winning the Irish Junior Championship in 1977 and the Rás Tailteann in 1979, Roche joined the Athletic Club de Boulogne-Billancourt amateur cycling team in Paris to prepare for the 1980 Olympic games in Moscow.

Soon after his arrival Roche won the amateur Paris–Roubaix, escaping with Dirk Demol and sprinting to victory on the track at Roubaix.

Roche remembers how he was told by his directeur sportif that if he did not win “he would be sent home to Ireland that day”.

He also finished on the podium at the early-season Paris–Ezy road race and finished 14th overall in the Sealink International stage race, which was won by Bob Downs. However, knee discomfort caused by a poorly fitted shoe plate led to a disappointing ride in Moscow, where he finished 45th.

Upon his return to France however, Roche racked up an impressive 19 victories toward the end of the season, which led to a contract offering from the Peugeot professional cycling team for 1981.

Roche scored his first professional victory that season after beating Bernard Hinault in the Tour of Corsica. Less than a month later he won Paris–Nice, where he became the first, and still the only, neo-pro to win the race.

Despite suffering illness, Roche finished his debut season with victories in the Tour de Corse, Circuit d’Indre-et-Loire and Étoile des Espoirs races, along with a second place finish behind Hinault in the Grand Prix des Nations.

In total, his first season yielded 10 victories for the fledgeling pro.

In 1982, his best placing was second in the Amstel Gold Race behind Jan Raas. But, his rise continued in 1983 with victories in the Tour de Romandie, Grand Prix de Wallonie, Étoile des Espoirs and Paris–Bourges.

Roche finished 13th in Tour de France the following year, while capping-off his season with a bronze medal in the world cycling championship at Alterheim in Zurich.

Roche switched to the La Redoute team in 1984 following contractual wrangles with Peugeot (the settlement of which led Roche to sport Peugeot shorts for two years before winning a court action against Vélo Club de Paris Peugeot), reprising his Tour de Romandie victory, along with triumphs in Nice-Alassio, Subida a Arrate and a second place finish in Paris–Nice. He finished 25th in that year’s Tour de France.

In 1985, Roche won the Critérium International, the Route du Sud and finished second in Paris–Nice again, while also making the podium in Liège–Bastogne–Liège with a third place finish.

Additionally, Roche won stage 18 on the Aubisque in that season’s Tour de France, completing the overall podium in third –  4:29 behind winner Bernard Hinault.

But, tragedy befell Roche next year, after he crashed at high speed during a six-day event at Paris-Bercy. This not only brought the curtains down on the remainder of his season, with only a stage victory in the Giro to impress his new Carrera–Inoxpran team, but the injury to his knee would serve to plague him for the rest of his career.

As a result, Roche finished the Tour de France that season in a disappointing 48th place, one hour and 32 minutes behind Greg LeMond, which he described was like “entering a dark tunnel” of pain.

However, the following year would prove to be Roche’s greatest, wherein he won the early season Volta a la Comunitat Valenciana, took a third victory in the Tour de Romandie and fourth place plus a stage win in Paris–Nice. He also finished second in Liège–Bastogne–Liège, the closest he ever came to winning a Monument Classic. He blamed his runner-up position on tactical naiveté and “riding like an amateur”.

En route to the overall victory in that season’s Giro d’Italia, Roche claimed three stage victories, including a win in the team time trial, becoming first winner of the Italian Grand Tour outside mainland Europe.

Perhaps Roche’s most memorable stage victory during the Giro was the stage from Lido di Jesolo to Sappada, where he contravened team orders  by commercing an early escape followed by a final counter-attack after being caught that resulted in him wresting the maglia rosa (pink jersey) from his teammate Roberto Visentini, who had been previously leading the classification.

Needless to say, Roche’s move not only caught the ire of the Italian tifosi, but cost him the support of most of his teammates.

In fact, Roche would later recount how the only member of his team that he could rely on for support was Eddy Schepers, while former teammates Robert Millar and Phil Anderson also helped to deliver him to victory.

Roche finished the Giro exhausted, but was still in good enough form that critics considered him a favorite for the Tour de France.

Following Bernard Hinault’s retirement, Laurent Fignon’s questionable form and with Greg LeMond out-of-the-picture due to an accidental shooting while hunting, the 1987 Tour de France was wide-open. It was also one of the most mountainous routes since the war, with no fewer than 25 stages.

Roche began to stamp his authority on the race after winning stage 10’s Individual Time Trial stage at Futuroscope, while finishing second in stage 19.

Stage 20 saw the challenging climbs of the Galibier and the Madeleine, while finishing at La Plagne. Roche attacked early-on, and stayed away for most of the day before being caught by Pedro Delgado, who attacked along the final climb.

But, despite losing almost a minute and a half to Delgado, midway up the climb Roche succeeded in pulling back his Spanish rival’s lead to just 4 seconds.

Upon crossing the finish, Roche famously collapsed and lost consciousness, while race medics rushed to give him oxygen.

When asked if he was ok after he revived, Roche replied “Oui, mais pas de femme route de suite” (“yes, but I am not ready for a woman straight away”).

From there, the maillot jaune (yellow jersey) changed hands several times during the race with Charly Mottet, Jean François Bernard and Delgado all wearing it before Roche used the final time trial to overturn a half-minute gap and win the Tour by 40 seconds, which at the time was the second narrowest margin in the history of the French Grand Tour since Jan Janssen beat Herman Van Springel by 38 seconds in 1968.

A victory in the World Championship Road Race in Villach in Austria that year also made Roche only the second rider to win the Triple Crown of Cycling (i.e. the Giro, Tour and Worlds in the same season).

Roche explained how he arrived unprepared for the undulating 278 kilometer course, which he was initially assigned the role of riding in support of his teammate Sean Kelly. But, after finding himself in the lead breakaway group that failed to respond to a late attack from Moreno Argentin, Roche executed a counter-attack of his own during the final 500 meters, overhauling the Italian rider by a matter of a few meters to seize the victory.

For all of his achievements that season, Roche was awarded the Freedom of Dublin medal in September.

At the close of 1987, Roche moved to the Fagor MBK team, bringing English riders Sean Yates, Malcolm Elliot and the 1984 Tour de France King of the Mountains winner Robert Millar along with him, as well as domestique Eddy Schepers.

As a result, the team was criticized for having too many English speaking riders.

Unfortunately, the 1988 season began badly for Roche, who suffered from a recurrence of knee pain that marked a gradual decline for him.

In 1989, Roche finished second in the Setmana Catalana de Ciclisme, and second again in Paris–Nice, marking his fourth runner-up finish in the French race. Moreover, he finished a paltry ninth place in the Giro.

Knee pain would ultimately forced him to withdraw altogether from the Tour de France.

Roche changed teams for 1990, this time riding for Histor Sigma.

Roche’s prospects began to improve that season after he won the Four Days of Dunkirk, which was followed up with victories in the Setmana Catalana de Ciclisme and Critérium International, while riding for Roger De Vlaeminck’s TonTon Tapis team in 1991.

However, Roche strangely missed the start of Team Time Trial during that season’s Tour de France, forcing him to withdraw due to missing the time cut.

Roche returned to the Tour de France next season, but could only muster a ninth place finish, while he mainly rode in support of his Carrera Jeans–Vagabond teammate Claudio Chiappucci.

Roche also raced the Nissan Classic Tour of Ireland that season as well. And, despite featuring prominently during many breaks, he only managed a fifth place finish.

The following season, Roche again finished ninth in the Giro d’Italia, followed by a lack-luster 13th in the Tour de France.

Roche decided to hang-up his wheels at the end of 1993, which yielded only a single win for the Irishman in the criterium at Chateau Chinon.

Nowadays, Roche lives in Antibes on the Côte d’Azur, where he remains very active in the sport via a handful of cycling tours that he’s opened up in Majorca.

He also takes part in a number of race organizations, and often works as a race commentator for Eurosport.

He has four children with his former wife Lydia.

His son Nicolas Roche was a professional rider until 2021, as well as the 2016 Irish National Road Race Champion.