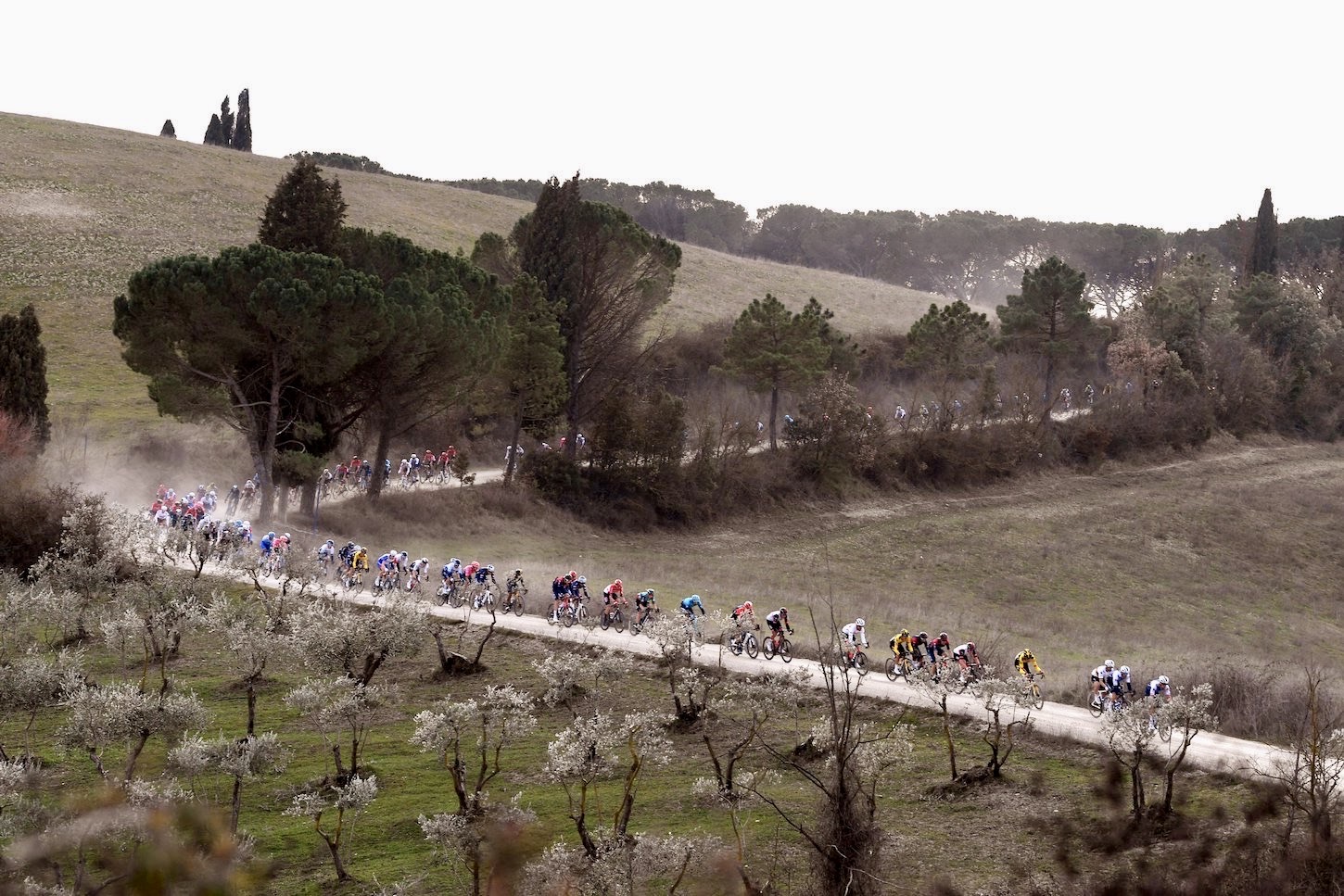 Pogačar made his winning move along Monte Sante Marie sector with just under 50 kilometers to go, emerging from a reformed peloton that had regrouped following a major crash at the 100 kilometer mark.

From there, Pogačar continued to increase his advantage over the chase along the steep gradients and tarmac despite a fierce headwind.

At one point, Carlos Rodriguez (Ineos Grenadiers) attempt to bridge his way to the leader, but to no avail.

Meanwhile, Pogačar continued to hammer out his lead along the final three steep sectors, still clinging to a one minute gap as he made his way up the Via Santa Caterina and down into the Piazza del Campo to triumph in this year’s Italian semi-classic.

Asgreen had assumed team leadership after Julian Alaphilippe was blown off the road in a massive crash, earning the Danish rider the final spot on the podium.

From the start, a breakaway sprang away, later finding 2:50 lead before the first sector of sterrati. By the taxing fifth sector, nine fugitives were 3:00 up the road.

Meanwhile, brutal crosswinds in Sector 5 caused a big crash in the peloton that took down Alaphilippe and caused Michael Matthews, Tiejs Benoot and a dozen other riders to abandon.

However, the head of the peloton wasn’t delayed by the crash, which drew closer to the breakaway, with Alaphilippe having to chase back with his teammates.

With 86 kilometers remaining, a quintet of escapees had opened up a 49-second gap over the crash-reduced peloton and 2:00 ahead of the Alaphilippe group.

Alaphilippe and others made it back to the front with 76 kilometers and five sectors to race, while the breakaway group was still holding to a  1:08 advantage up the road.

In the meantime, Movistar drove the field toward the toughest sector of the day, Sector 8, Monte Sante Marie, where the fugitives were finally caught.

Soon after, Alaphilippe decide to stack, who was soon joined by Simon Clarke (Israel-Premier Tech), Quinn Simmons (Trek-Segafredo) and Pogačar, with Tim Wellens (Lotto Soudal) bringing up a group of chasers and accelerating as well.

With a little less than 50 kilometers remaining, Pogačar hit out, quickly jettisoning his rivals, and eventually making his way to victory along the infamous white gravel roads.