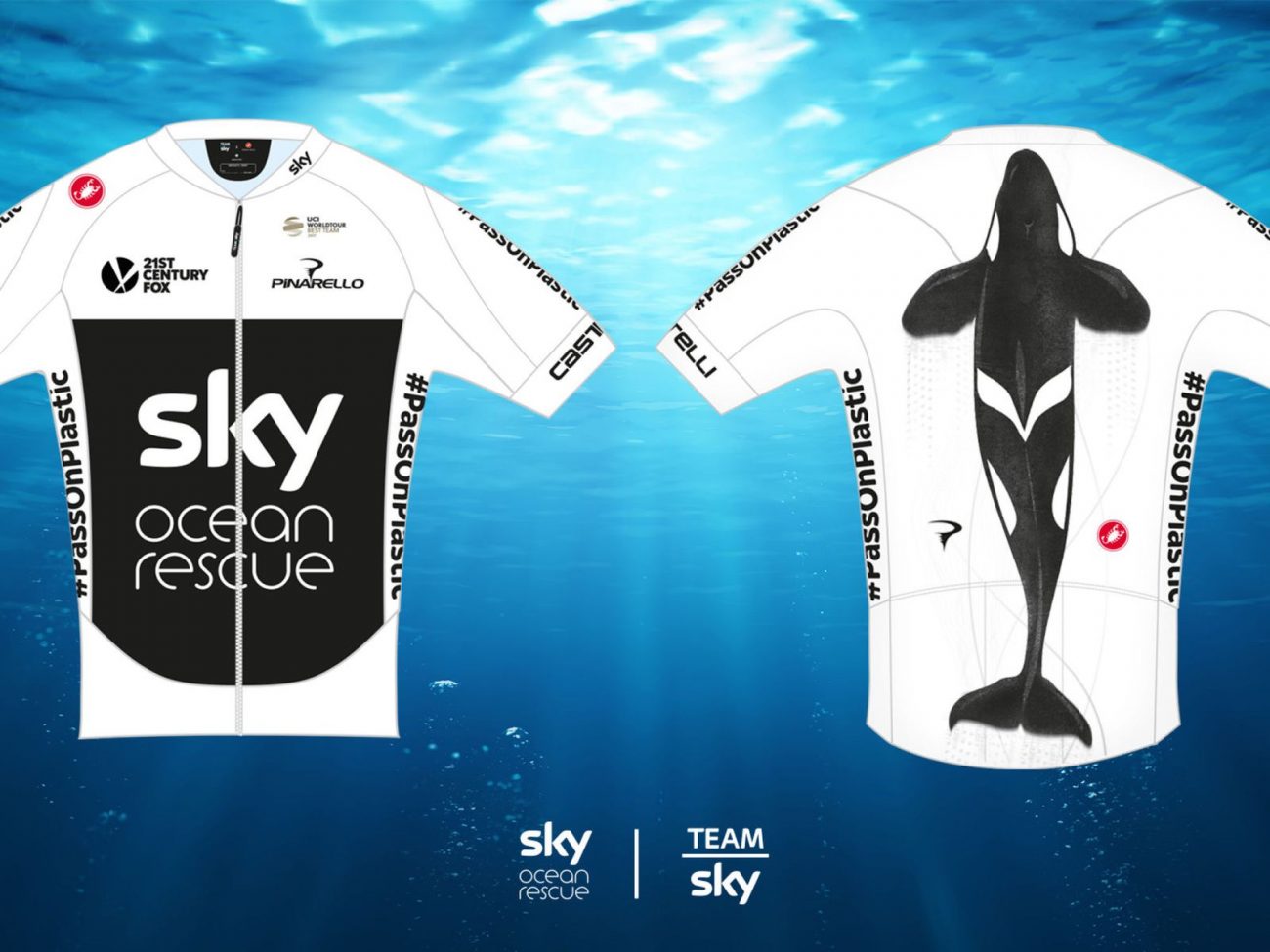 Chris Froome will sport a Sky Ocean Rescue jersey as he bids to retain his Tour de France title later this summer.

Froome, along with Team Sky teammates, will wear the special branded “kit” to help raise awareness of the influential campaign during stage 21 of the French Grand Tour.

A release from Team Sky notes that, “the new kit will act as a catalyst to drive awareness for Team Sky leading the way in inspiring people to make simple, everyday changes to stop our oceans drowning in plastic.’ The kit will be showcased at the Tour de France, where Team Sky riders will wear a bespoke version jersey at the Team presentation, that has been exclusively developed from plastic material that has been redeemed from the oceans.”

The special-edition kit, which features an orca on the back of the jersey, aims to drive awareness and understanding of Sky Ocean Rescue (SOR) to the cycling community and beyond, as well as ensuring Team Sky stands out in the peloton.

With 8 million tons of plastic entering the ocean every year, Sky has committed itself to eliminating single-use plastic from its business. And is using its considerable visibility to draw attention to this growing environmental disaster. Castelli adds that “by simply eliminating packaging in the supply to Team Sky’s Tour de France team we will save some 12,000 polybags.”

David Brailsford, Team Principal, Team Sky, said ,“we want to encourage people across the world to think about their own use of plastic and make changes in their everyday life. We are all in a position where we can make a difference.”

He continued, “at the upcoming Tour de France, the team will be wearing a striking new kit design to highlight the issue to a global audience of millions. We want to encourage people across the world to think about their own use of plastic and make changes in their everyday life. We are all in a position where we can make a difference.”

Steve Smith, Brand Manager at Castelli, said, “the Sky Ocean Rescue project has been an impetus for us to find new ways to reduce our use of single-use plastic and to look at our sustainability in new ways. We’re testing new packaging with the Team Sky Tour de France kits that will make its way into our collection and potentially save 4 million polybags per year. We hope that the daily reminder during July will help other companies re-think what they can do to reduce their impact.”

Froome, who is the first British rider to win all three grand tour events and only the third person in history to do so, said: “It’s great that the team are getting behind such an important issue – one that is having a huge impact in the world we live in today.

“The special edition kit is fantastic and will really help to raise awareness at the Tour de France.”

“But it’s important that the legacy continues after that, as we look to build on the amazing work Sky have done so far with their Sky Ocean Rescue campaign with our own Race to 2020 commitment.”

Team Sky has pledged to remove all single-use plastic packaging from its operation by 2020, and work with its partners to bar such waste from its products and supply chain by the same date.

Fans will also be encouraged to change their behavior towards single-use plastics.

They will be given tips helping them to avoid plastic packaging while enjoying the sport at home or out on their own bike.

Brailsford added, “Sky Ocean Rescue has been at the forefront of a global campaign on single-use plastics over the last year – and it is making a real difference.”

“We are proud to join this important fight to change behavior and help save our oceans.”

“Like all parts of society, cycling must do more to reduce its reliance on single-use plastic at every level.”

“The nature of our sport means we have a special responsibility to the environment and at Team Sky we want to take a lead.”

Sky CEO Jeremy Darroch added, “I am so pleased that Team Sky and its riders are getting involved to build on our campaign.”