The Strange and Unusual Cycling Categories of the UCI 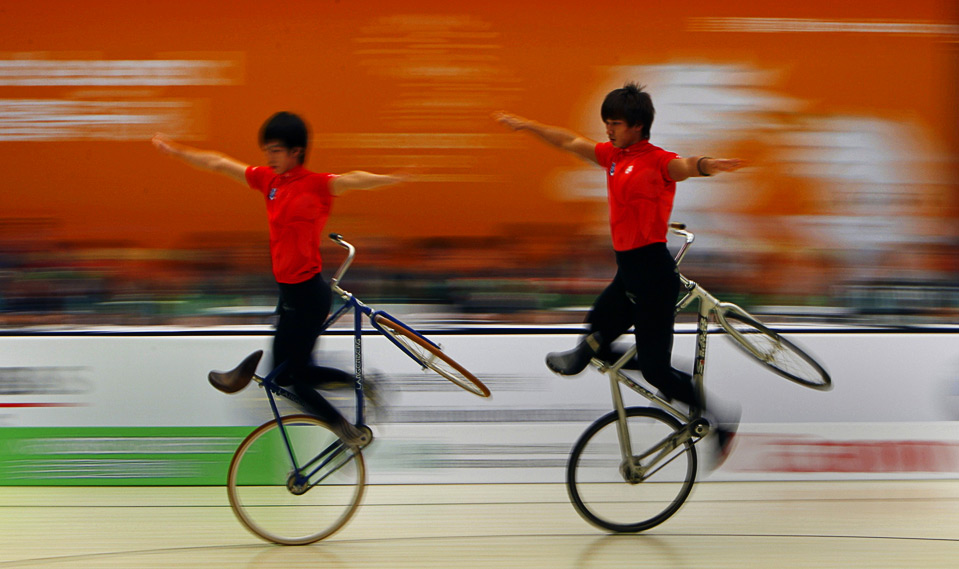 When enthusiasts think of cycling on the competitive level, their interests are typically relegated to traditional road racing, track, cyclocross, mountain biking, and to some extend, perhaps even BMX.

However, there are some strange and unusual categories to competitive cycling that few are aware of, such as Artistic Cycling and Cycle Ball, which have their own respective categories within cycling’s governing body – the Union Cycliste Internationale (UCI).

As obscure as these disciplines might seem, they both posses a strong following on the European scene, with an interesting sense of sub-culture that has continued to perpetuate their existence – despite the dominance of the other disciplines.

Artistic Cycling is a form of competitive indoor cycling in which athletes perform tricks (called exercises) for points on specialized, fixed-gear bikes in a format similar to ballet or gymnastics. The exercises are performed in front of judges in five-minute rounds by singles, pairs, four- or six-man teams.

The first unofficial world championship in Artistic Cycling was held in 1888, by Swiss-American Nicholas Edward Kaufmann, which was largely a publicity stunt to showcase his trick bicycling.

However, over the decades, the sport continued to flourish, gaining wide-appeal throughout eastern Europe, with the first official world championships being held for men in 1956 and for women in 1970.

The riding area for Artistic Cycling is a wooden court, which also serves cycle ball competitions, that ranges in dimensions from 9 x 12 meters to 11 x 14 meters, where the maximum size is mandated for international competitions.

The bicycles used for Artistic Cycling are a form of fixed gear bicycle. The gearing of the chainring and sprocket are run at or near a one to one ratio, but the chainring may not have fewer teeth than the sprocket. The wheels must be of equal size and are closely spaced in order to make tricks, such as wheelies, easier to perform.

The handlebars are similar in form to a shallow drop handlebar found on a racing bicycle which has been turned upside down. Handlegrips or bar tape are applied to the top, horizontal portions of the bar. The handlebar, which can spin 360°, is mounted to a stem that has no horizontal extension, which puts the stem clamp in line with the steering axis and allows for the handlebars to remain in the same relative position no matter whether the front wheel is facing forward or backward.

The crank arm length may have a center to center distance of 130 to 170 mm.

Cycle Ball or Cyclo Ball, also known as “radball”, was invented in 1893, by a German-American named Nicholas Edward Kaufmann, and steadily gained popularity around Europe. The first Cycle Ball championship was held in 1929, with the sort gaining popularity as far away as Japan.

Cycle Ball is played by men only, with a team that consists of two players who may act as goalkeeper or field player. At international competitions the field uses exactly the same dimensions (11×14 meters) as Artistic Cycling.

A wall 30cm high surrounds the sidelines to keep the ball inside the field.

A game consists of two halves of seven minutes. The teams change ends at half time (two minutes). If a team is obviously delaying the match, the referee may first of all add extra time and if that behavior continues give a warning or even reprimand the whole team.

The ball itself is usually filled with horsehair and has a diameter of 17 or 18 cm. It can travel at up to 60 km/h.

The ball is moved with either the front wheel or the back wheel. The feet may not kick the ball. Within the goal area the goalkeeper is allowed to use his hands in order to catch the ball and “defend” his goal, which has a size of 2×2 meters.

Offenses outside the goal area result in a free “kick” for the opposing team. During a free kick the other team must be a minimum of 4 metres from the ball.

Rule offences or offences inside the goal area are punished with a 4 meter-penalty. Should the ball leave the field along the side-lines or base-line the same rules as other ball games apply.

If a player touches the ground he is not allowed to continue. He must cross the base-line (next to his own goal) with the front or back wheel of his bike and then continue with the game. Often the teams avoid this situation with a free kick giving the opposite team no chance to move towards the empty goal.