The UCI’s New Track Cycling Model Is a Step Backwards 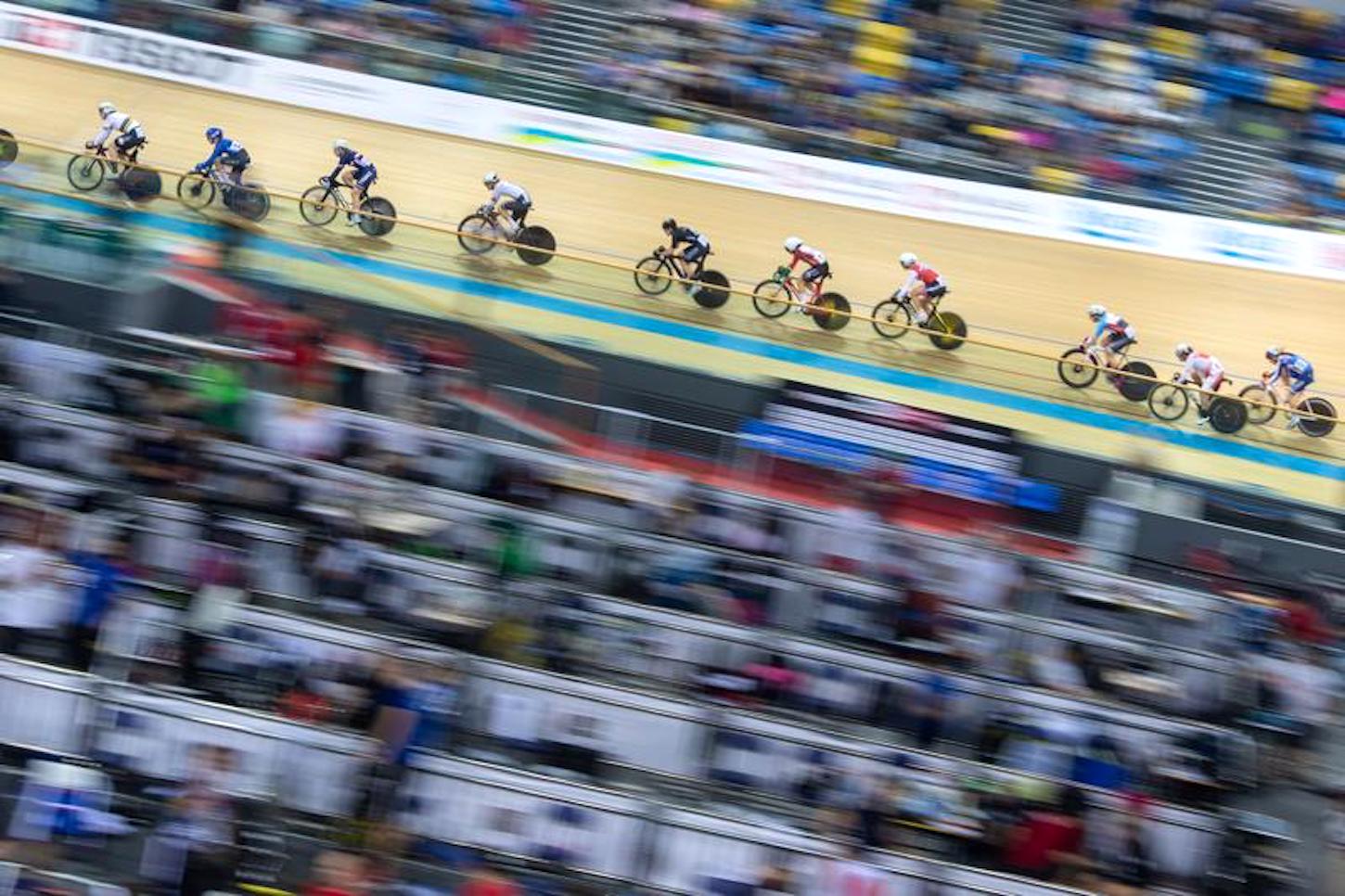 The UCI’s recent decision to overhaul the international track cycling calendar will have far-reaching impacts. The changes completely rearrange the World Cup races to new summer-time dates, and add new Nation’s Cup races interspersed through the winter months. On the surface, this realigns elite track racing to converge with the World Road Championships date window, similar to the pre-1999 calendar. But the additional regulation changes – which limit event participation to National Teams and selected national team riders – will be a huge step back and effectively kill independent professional track cycling teams, and potentially restrict the future development of professional-level track events.

Response from the two prominent track racing trade teams, BEAT Cycling and the Huub Wattbike Test Team, was immediate. Eliminating private teams from the entire UCI format – and the venue and television exposure which is critical for their sponsors – amounts to a de facto death sentence. Both organizations strongly criticized the UCI, and particularly President David Lappartient, for taking such drastic steps without wider input from riders, teams, and event organizers.

BEAT Cycling quickly organized a petition with over 5,500 signatures in just a few days, and the number is climbing. The team has a long-term strategy to blend track and road events in its program development, and has performed at the highest level against national teams in recent UCI World Cup meets. According to Edwin Gulickx, the principal behind BEAT Cycling, “I think riders will suffer and less money will come in the sport. Why would you want to ban teams who can bring more funding in the sport, so we can finally really develop the sport to a professional level?”

Impacts of the UCI changes reach beyond just the teams. New racing ventures, like the nascent TeamTrak series being developed by U.S. promoter David Chauner’s World Cycling League, could be held down by the restrictive regulations. Chauner hasn’t relied on the UCI in the planning of his project, and ran a test event under a special license recognized by USA Cycling. However, the new UCI regulations could create calendar conflicts, new licensing approval hurdles, and potential limitations on who will be eligible to compete.

No one is exactly sure how much good is going to come from the UCI’s new format and regulations. Fundamentally, track cycling has been an important cornerstone of the Olympics, although it has waxed and waned in its importance on the UCI’s international calendar. The UCI Track World Cup, introduced in 1993, helped to reinvigorate the sport at a time when there were few international, Olympic off-year opportunities for elite competition other than the national and World Championships. As the remaining Six-Day races on the professional calendar were hitting the economic skids, there was little reason for cyclists to focus exclusively track racing other than Japan’s Keirin circuit until the World Cup came around.

There will likely be further refinement to the proposed changes between now and 2020/2021, which is when the new format and regulations take effect. In some ways, the changes may create incentives for established national team programs to expand and professionalize similar to the entrepreneurial path already proven by BEAT Cycling and Huub Wattbike. The changes could also be a catalyst for investment in new track racing events or series.

Investment in talent development, particularly for women athletes, is a recognizable benefit which carried over from continuity of the World Cup. National federations which were once focused only on the World Championships and Olympics responded well to the format and supported larger contingents of high-performance program riders – men and women alike due to the emergence of Olympic event parity. The greater frequency of international competition provided national teams with more opportunities to field riders in different combinations and provide young riders with valuable developmental experience.

History shows that these track programs were the entry point to the sport for many top racers – including several Tour de France winners and men’s and women’s WorldTour stars – because track racing can hone competitive skills, training discipline, fitness, and overall professionalism. The World Cup can be considered successful in at least this sense, but new restrictions on who can compete in future flagship events may have far-reaching implications for the sport’s overall health.

As mentioned, regulatory changes to competitor eligibility will likely be a death-sentence for the privately sponsored professional track teams. These squads grew organically as marketing entrepreneurs saw a valuable opportunity to enter into pro cycling’s economy and demonstrate return on investment to potential sponsors. In turn, they provided a salaried competitive career life-line to many track stars who were no longer part of their respective national federation programs, or who desired a more lucrative and self-directed option in their profession. The success of these first-mover trade teams was paving the way for other teams and more potential investment to enter the sport – at least until the UCI’s announcement last week.

The reality – as is often the case – is that the athletes will now be hurt the most by this transformation. The restriction to national teams – where riders are typically selected by the federation – could mean the end of the entire concept of “professional track cyclist.” First, the riders’ earnings could essentially be restricted to a national federation stipend and any individual endorsements permitted by their nation’s by-laws. Second, it eliminates the freedom of movement in those athletes’ career paths if only national teams are permitted to race in the world’s biggest events.

If a rider wanted to pursue a better economic opportunity, he or she would have to change nationality in order to change teams – an almost impossible challenge. Riders who fall out with their national federations or are otherwise left out from selection would be left unemployed, despite their proven ability to compete at the highest level. And as the BEAT Cycling and Huub Wattbike teams have shown, many of those athletes still have the skills and gas to beat the national federations at their own game.

The UCI changes hit event promoters on three sides: calendar and format conflicts with the new UCI events; attracting competitors; and engaging new cycling fans. According to Chauner, one of the critical improvements his group expects to bring into track racing is a shift from individual competition to more mass-start tactical races and teams identifiable by their home region or location. Over the past five years, others have had similar objectives.

“The entertainment of mass-start team racing competition is a key to engaging fan interest, filling velodrome seats and creating compelling TV coverage,” says Chauner. As The Outer Line pointed out in earlier explorations of track racing, track is one of the only cycling formats tailor-made for stadium revenue and cost-effective broadcast production. Legitimate high speed racing, spotlights on rider personalities, and encouragement of ‘home team’ allegiances and athlete rivalries are all in play for Chauner, who adds, “The UCI’s ‘Olympic’ style format just doesn’t do that well.”

While the Olympic format emphasizes both individual and head-to-head events, the program also includes long time trial rounds and multiple heats before ultimately getting to the finals. And after each event finale, protocol dictates a medal ceremony before moving to the next event in sequence. While this is typical of most Olympic sports, it makes UCI track races long, confusing and difficult to attract and sustain a wider sports-viewing audience. Modern sports fans have gravitated to shorter events, and tend to follow favorite teams and athletes closely over time. “That’s what engages fans and sells tickets,” says Chauner.

There are a lot of ‘what-ifs’ when considering what national teams might do when riders choose to compete in more lucrative races instead of riding for their country at a UCI-series event. Promoters would have to work creative deals with national federations to avoid calendar conflicts; one can imagine the fallout a rider might face in an Olympic selection year if they stray from their programs to race somewhere else where the money is better. What Chauner and others may lose out on due to the UCI changes is the ability to capitalize on the names of popular riders to promote their events, and popular riders may lose out on fleeting opportunities to capitalize the value of their cycling celebrity.

But the fact that riders could be pressured to turn down lucrative earning opportunities in exchange for maintaining national team membership – and the right to compete in the world’s biggest and most economically visible races – is what may doom the UCI’s move.

The UCI may have stepped into new legal territory by creating a restrictive environment that limits the athletes’ opportunities to pursue their chosen careers. In December of 2017, two speed skaters successfully sued the International Skating Union (ISU) for unfair and restrictive regulations, in breach Article 101 of the Treaty on the Functioning of the European Union. They would have been penalized by the ISU for competing in an event which the ISU had not yet licensed, but which promoted more prize money than other ISU-sanctioned events.

Relevant to track cycling athletes and promoters, in ruling on the case, the European Commission stated, “The severe penalties the (ISU) imposes on skaters also serve to protect its own commercial interests and prevent others from setting up their own events. The ISU now has to comply with our decision, modify its rules, and open up new opportunities for athletes and competing organisers, to the benefit of all ice skating fans.”

Time will tell if affected track cyclists or promoters pursue a similar grievance, but this legal precedent dismantled long-held beliefsabout how much control national governing bodies and international federations can exert on athletes and organizers. Athletes cannot be penalized for pursuing economic opportunity, and they have a right to freedom of movement to do so. If the money is better, the athlete has the mobility and right to take it; if the system is restrictive to economic opportunity and business competition, it is also potentially illegal under national and international labor laws.

When approached by The Outer Line for comment, UCI Vice President and Management Committee member Tom Vandamme deferred the inquiry to President David Lappartient – and Lappartient has yet to respond publicly on the proposals. Thus, we are left with several unanswered questions. What research or economic modeling went into the decisions? Who brought these forward in committee? And as BEAT Cycling and Huub Wattbike posed in open statements to the UCI, why weren’t athletes, team managers, and velodrome operators included in the conversation? In sum, this overhaul has many perplexed.

Meanwhile, not every top track rider will have a spot on his or her national team, and without alternative competitive options, many will be forced to choose between having a track racing career and potentially being put out of work. Details on a new “innovative format” alluded to in the UCI’s press release will not come out until September 2019, but efforts to build up a more investment-friendly professional track racing economy may hit dead-ends if promoters can’t continue to innovate around the regulations to deliver more exciting events.

In the end, international track racing could get stuck in a sporting “Stone Age,” where pro-level competitors race for medals in essentially elite amateur events – in near-empty velodromes, in the name of pure sport. And as many professional athletes have said in different ways over the years, “love of the game” doesn’t pay the rent. What the sport really needs now is professional development and forward-thinking investment to bring it to the next level.