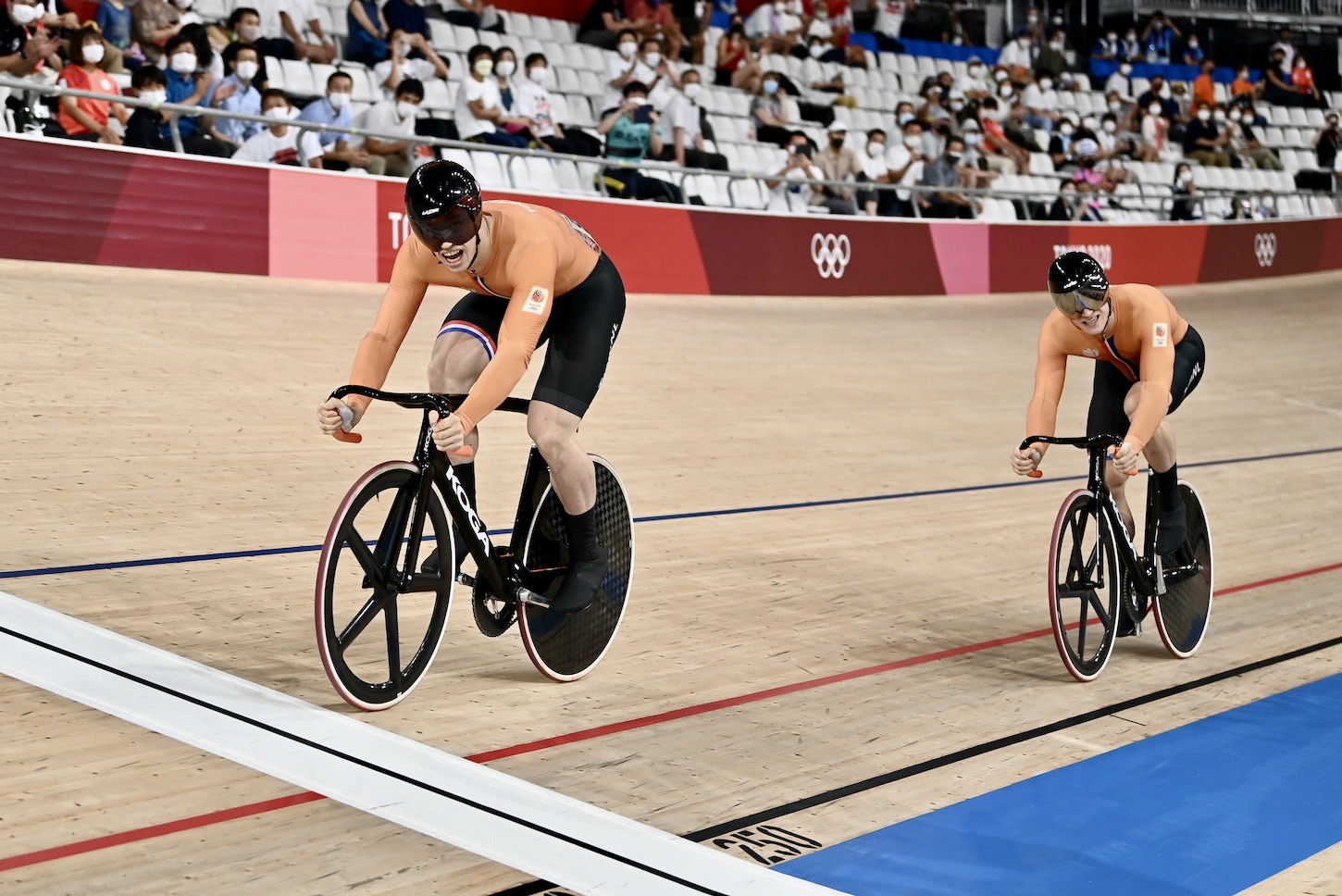 More history and more records: the Izu velodrome was graced with new stellar performances on Friday, the fifth day of competition for the track cycling events of the Olympic Games Tokyo 2020. Great Britain’s Laura Kenny cemented her place in Olympic history winning the Madison alongside Katie Archibald. Harrie Lavreysen imposed the Dutch absolute dominance in the men’s sprint. And the female sprinters engaged in thrilling battles heading towards their own finals.

“Unbelievable – I’ve never wanted to win a race so much in all my life,” Laura Kenny said as she took her fifth Olympic gold medal, her first at Tokyo 2020. “With Katie I feel like I’m racing with a sister – I’m so grateful to have her here and her support, I couldn’t have done it without her.”

“I’ve never wanted something so much, I’ve never been so nervous but we’ve been so clinical with our approach,” Achibald added

Lavreysen looked equally triumphant after powering to glory in a thrilling duel against his close rival Jeffrey Hoogland, who had won by his side in the team sprint on Tuesday. This time, the two flying Dutchmen offered a furious battle in the individual sprint and, after three captivating races, Lavrerysen, already a six-time UCI World Champion, took gold for the second time at the Olympic Games.

The first Women’s Madison final in the history of the Olympic Games attracted seasoned champions wanting to leave their mark in the Izu velodrome and on a global scale. Great Britain’s duo brought a total of five Olympic gold medals into the race with the iconic Laura Kenny and her partner Katie Archibald. And they dominated the early sprints to quickly take a solid lead in Friday’s final.

After 80 laps (out of 120), Kenny and Archibald had already accumulated 37 sprint points (out of 40)! And they kept dominating the race until the end, also lapping the field along with Denmark and the Russian Olympic Committee, until Laura Kenny crossed the line ahead of everyone, claiming the final 10 points of the day (total: 78). She celebrated with her fist triumphantly raised in the air.

In the wake of the British stars, Amalie Dideriksen and Julie Leth (DEN) took the silver medal (35 points), ahead of Gulnaz Khatuntseva and Mariia Novolodskaia (ROC, 26 points). After a strong start, UCI World Champions Amy Pieters and Kirsten Wild (NED) suffered a crash midway through the race and finished at the foot of the Olympic podium.

Winners of the team’s sprint together, Harrie Lavreysen and Jeffrey Hoogland had another appointment in the final of the individual sprint – a discipline they also dominated in the last two editions of the UCI Track Cycling World Championships presented by Tissot, with Lavreysen taking gold and Hoogland silver both in Berlin (GER) and Pruszków (POL).

The two Oranje stars made sure they’d battle for glory again when, in the semi-finals, they dominated the last men standing between them and a Dutch duel. Hoogland won his two races against Denis Dmitriev (ROC) and Lavreysen was equally dominant against Jack Carlin (GBR).

The young British sprinter, already a bronze medallist in the men’s team sprint, overcame Dmitriev in two races while the Dutch duel for gold was much tighter. Lavreysen won the first battle, with a 0.012s margin, but Hoogland survived the second race by 0.015s!

The third battle was too much for Hoogland though, who had to settle for silver (again) while his compatriot Lavreysen became the third Dutchman to win the individual sprint at the Olympic Games, about a century after the pioneers Maurice Peeters (1920) and Jacobus van Egmond (1932).

Women’s sprint: Braspennincx on a roll

New Zealand’s Ellesse Andrews, silver medallist in the keirin, set the Izu velodrome alight early as she set a new Olympic record in the 200m flying start: 10’’563. France’s Mathilde Gros and Germany’s Lea Sophie Friedrich had been less successful on Thursday (both having been eliminated in the quarter-finals of the keirin), but they were even faster than Andrews on Friday: 10’’400 for Gros, and then 10’’310 for Friedrich. Canada’s Kelsey Mitchell (10’’346) and Germany’s Emma Hinze (10’’381) eventually squeezed in between the Frenchwoman and the German sprinter.

The 1/32 finals had already delivered an explosive battle between two gold medallists in Tokyo 2020: Shanne Braspennincx (NED) and Shanju Bao (CHN). Following her successes in the keirin, Braspennincx dominated the heat. Tianshi Zhong (Bao’s partner when they won the team’s sprint) was more successful against Mexico’s Luz Daniela Gaxiola Gonzalez.

Bao eventually survived the repechages, as did Japan’s Yuka Kobayashi, delighting the fans allowed in the Izu velodrome. But both of them were eventually eliminated in the next round.

The women’s sprint will continue on Saturday, with the 1/8 finals and quarter-finals to be raced on the sixth day of track events at Tokyo 2020. The atmosphere in the Izu velodrome will be electric for the first round of the men’s keirin, with the likes of Lavreysen, Yuta Wakimoto (JPN) and Jason Kenny (GBR) launching their new quest for glory. The endurance experts will also aim to shine on Saturday as they chase medals in the men’s Madison.