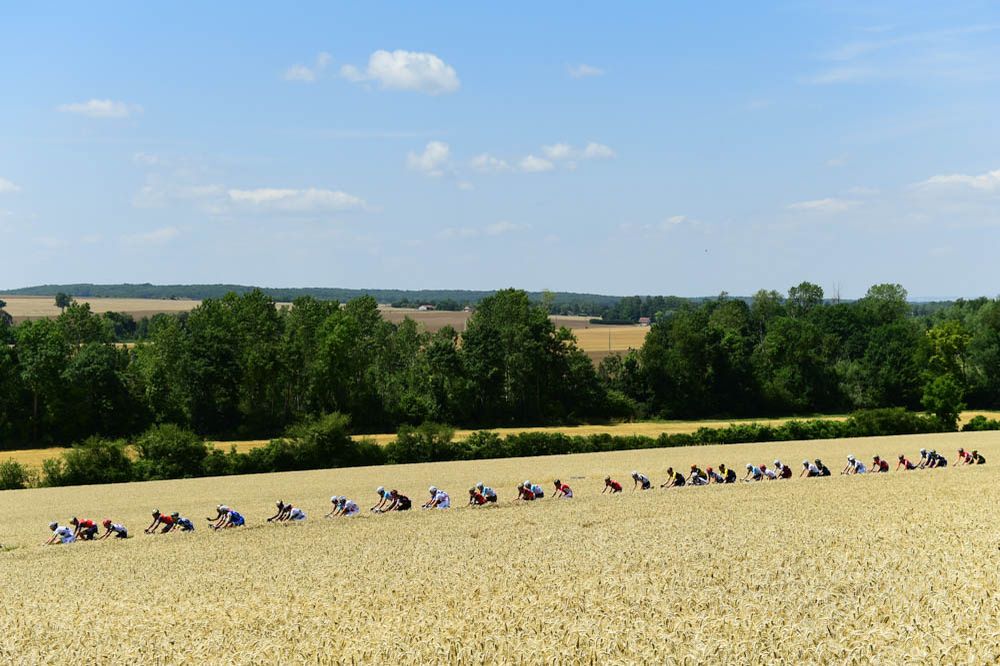 “It’s an incredible success. I’m really proud of it,” Kittel said. “I’m in great shape. I’m super happy that the team supported me so well today. I think we did a good lead-out. We believed in this chance, in this victory. It’s just crazy. Being back here now in the Tour, after 2014 and 2013, celebrating now already three stage wins is incredible. I’m so happy about it and I enjoy every minute of it.”

“I had no clue whether I won or not on the finish line. I just thought, ‘This is going to be close.’ I tried to make myself three metres longer,” Kittel said. “Actually, at 100 meters  when I was on Boasson Hagen’s wheel and we came around the corner, I thought it was still 200 meters to go from there, but it was only 120 or something. Then I knew I just had the door was open on the right side and that I could pass him. It was just enough.”

Meanwhile, Chris Froome (Sky) finished safely in the peloton to maintain his grip on the overall classification, with a 12 second lead over his teammate Geraint Thomas, with Fabio Aru (Astana) in third at a further 2 seconds back.

From there, the escapees went on to establish an advantage of three and a half minutes over the peloton at the mid-point in the stage.

However, as race headed into the final 30 kilometers, the peloton began to take up the chase in earnest. And, by the time the main field entered into the last 15 kilometers, the breakaway group’s lead had been reduced to just 50 seconds.

At that point, the catch was imminent, with Gène being the first escapee to get reined in by the peloton with 7 kilometers to go. And, a further kilometer later, Mori, van Baarle and Bouet were caught as well.

The speed toward the finish was blistering, as the bunch hit over 60km/h into Nuits-Saint-Georges. Even with 2 kilometers still to go, there was quite a bit of jostling for position, with Nacer Bouhanni (Cofidis) and Arnaud Démare (FDJ) briefly touching shoulders.

Kittle tucked in behind Boasson Hagen, but as the Norwegian rider launched his full-on effort, Kittel found himself slightly distanced.

Somehow though, the German rider managed to make up lost ground during the final 75 meters to nab the win.

As a result of Arnaud Démare (FDJ) finishing outside of the top 10, Kittel now wears the green jersey of points classification leader.