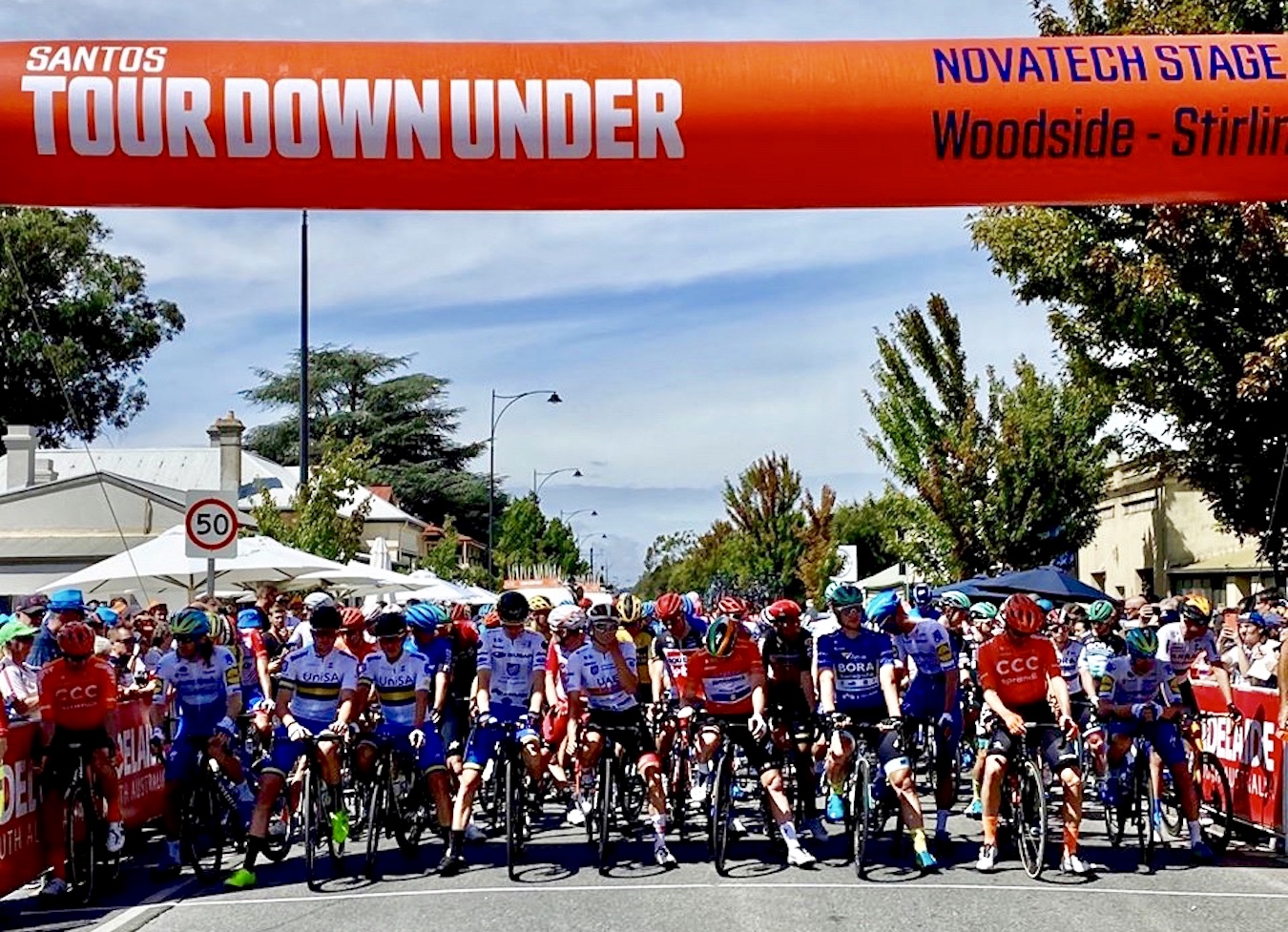 Stage 2 of the Tour Down Under ended with a familiar sight today, with Caleb Ewan once again crossing the finish line in first place after a perfectly timed sprint.

There was also a sense of relief for Ewan and his team as he and the others from Lotto Soudal didn’t appear to have been caught in a crash only 1.4 kilometers from the finish that claimed numerous victims including high-profile riders like Simon Yates, as well as Elia Viviani (Cofidis Solutions Credits), Ben Hermans of the Israel Start-Up Nation team. Hermans sustained a collarbone fracture and is out of the race.

“I’m super happy with that win,” said the new race leader, Ewan, who now leads Sam Bennett on GC (although the two stage winners share the same time and only a count-back on stage placings puts the Australian ahead in the rankings).

Last year’s champion, Daryl Impey, was second in the stage and he’s now ranked third on GC, one second behind Ewan and Bennett. The South African champion was well positioned throughout the stage and his bid for a third successive Santos Tour Down Under title is still on track but it has suffered a setback because of the injuries sustained by Yates.

“The boys did an absolutely perfect job today,” said Ewan. “They did everything I asked for and I got delivered to the line in a perfect position.

“When you take a win like that, you really can’t do it on your own. I said to them yesterday, ‘If I’m going to win today’s stage, it’s a tough one so I need all the help I can get…’ And they really helped me all day and kept me in a good position which meant I could avoid the mess. And that helped me in the end because I had good legs for the sprint.”

After the podium he acknowledged the difficulty of the Stirling stage which features 2,357 meters of climbing.

“We always know it’s going to be a tough day and it’s one of those days that can go either way,” explained Ewan. “It can be a sprinter like me getting to the finish and winning, or it can be guys like Daryl [Impey].

“Today was quite mixed: it was Daryl second and [Nathan] Haas third. It’s a pretty mixed podium. Those guys are a bit punchier and I’m a sprinter, so it’s one of those exciting kind of stages for cycling because it’s really hard to pick a winner before the start.”

Nathan Haas has a new team and a new approach to his racing. Of course, he would have liked it if he earned his maiden TDU stage win but third place in Stirling is a solid consolation. Still, his thoughts after the race weren’t on his result, rather the condition of his team leader at Cofidis Solutions Credits, Elia Viviani.

With the European champion having his wounds tended to in the van behind Haas, the Australian explained his emotions after a frantic day of racing.

“I’m feeling really terrible for Elia right now,” said Haas. “We were here for him today.

“He’s super hungry and this is a disappointment, but I’m sure a guy like him knows how to come back from this.”

Haas then spoke of his own result: “In terms of my third today, the bigger thing for me – as I don’t really care about the position – is that I’m just finally feeling my mojo again after what was easily the hardest year of my career/life last year.”

He summed up the stage with a review of his new approach to racing. “I’ve said this before, but when people believe in you, you start to believe again in yourself.

“I’m hoping I can start to repay the faith that Cofidis Solutions Credits has put him me.

“I was in front of it,” concluded Haas, when asked about the crash. “A big wave just came from the left. I even squeezed me out a lot. I had to slam on my brakes, and I could hear the crash happen.

“I’m told that it wasn’t actually on my wheel, it was a few wheels back. But it was a big, loud bang and I hate to hear that in cycling.”

The day’s breakaway group reached the final finishing circuits in Stirling with just 1:10 advantage over the peloton, with Israel Start-Up Nation’s Omer Goldstein claiming the top prize at the first sprint. Things fell apart from there, however, as Astana’s Laurens De Vreese attacked the group when the peloton got close, starting his own solo adventure.

The Astana rider claimed the final sprint of the day, while behind his breakaway companions had been swallowed up, allowing GC contenders Jay McCarthy (Bora-Hansgrohe) and George Bennett (Jumbo-Visma) to fight for the remaining time bonuses.

The peloton caught De Vreese with 25 kilometers remaining, and from there the drama died down as teams started to think about setting up their leaders for the finish.

Team Ineos’ plans for Rohan Dennis went slightly sideways when the time trial world champion had a mechanical inside 20km to go and needed wheel change, but Luke Rowe was there to shepherd Dennis safely back into the peloton.

With the GC contenders and the sprinters still in the bunch, the jockeying for position started in earnest inside 10km to go and a lot of uphill ground to cover.

Mitchelton-Scott waited for the final climb to start and then sent the entire squad to the front to drive up the pace for Impey, and the gambit almost worked except for failing to dislodge Ewan.