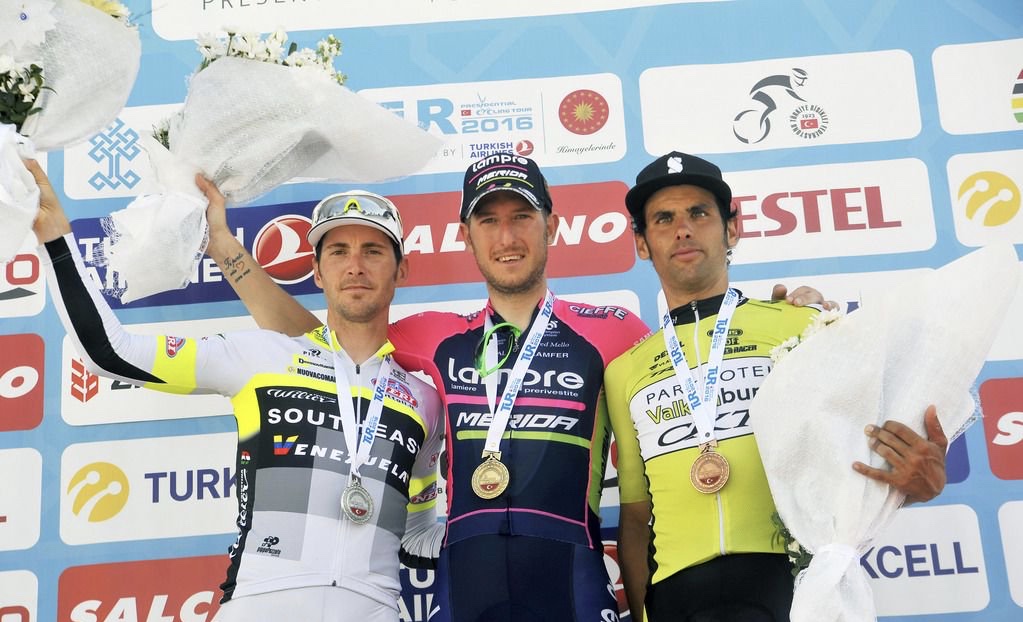 Sacha Modolo (Lampre-Merida) racked up a second stage victory in the Tour of Turkey today, after claiming stage 7 in a sprint finish ahead of Manuel Belletti (Southeast) and Marco Zanetti.

Meanwhile, José Gonçalves retained his lead in the overall race, ahead of tomorrow’s final stage in Selçuk.

“The profile of the course was not flat, we covered some climbs: they were not demanding as yesterday ones, however they could have been selective – Modolo explained – Yesterday I had good feelings while climbing, the sports directors told me that I must focus my attention on the top result because I had a good condition and so I did.

“During the race, my legs were great and, thanks to the support of my team mates, I did not spend energies in the approach of the climbs. I could reach the summit of the last hill, at 8 km to the arrival, with still many energies which allowed me to make a very fast sprint. I began my progression in the right moment, I did not make mistake as I had done in the 4th stage, when I started too early. I’m happy for the victory and I’m satisfied in view of the Giro d’Italia“, Modolo added.

From there, the group went on to establish a maximum advantage of 4:20 over the peloton.

However, the escapees were eventually reined by the peloton during the final 16 kilometers, under the auspices of the Italian continental team Unieuro.

Not long after, Caja-Rural-RGA’s Lluis Mas attacked, but a strong head-wind ultimately forced the Spanish rider back into the fold.

“Last year I attacked towards the top of the last climb before the downhill to Marmaris”, the punchy Spanish rider explained. “I remembered it was a great feeling so I tried again 1km before the summit with the idea of going for the stage win after the other tasks of the day were already completed. We had delivered José Gonçalves to the final part of the stage with no worries.”

Next, came an attack from Greg Henderson (Lotto-Soudal) along the descent during the final 5 kilometers. But, just as his predecessor, he too was quickly reclaimed by a charging peloton.

With the peloton now back together, riders began vying for position during the final run-in to the finish, with Modolo emerging as the strongest sprinter.