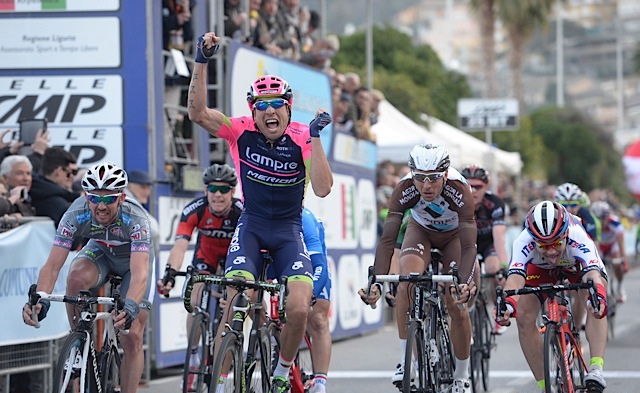 “It’s the third consecutive win for Lampre-Merida at the Trofeo Laigueglia. I couldn’t fail after the great work done by Niemec, especially in the finale on the Capo Mele. Without his effort the three attackers wouldn’t have been caught,” Cimolai said.

“It was an wide-open sprint because we were all tired. The finale of the race had hurt all our legs.”

“I was sure that all the hard work I’d done would pay off and it’s hugely satisfying to win, even if I’m going to keep my feet on the ground.”

For the most part, the peloton stayed together for the first 30 kilometers of today’s race.

However, as the peloton reached the first climb of the day, a small breakaway group containing Jonathan Paredes (Team Colombia), Nicola Gaffurini (MgKVis Vega), Adriano Brogi (D’Amico Bottecchia) and Jerome Cousin (Europcar), managed to ride clear. And, from there. the escapees managed to open up a modest advantage of 1:20 over the peloton.

At one point, the breakaway group’s lead extended to over seven minutes. However, after Lampre-Merida decided to take up the chase, their lead dropped to a little over four and a half minutes on the climb of the Crocetta.

With 50 kilometers remaining, the peloton had successfully brought the escapees within view. From there, Cannondale-Garmin decided to take over the duties of leading the chase – subsequently splitting the peloton, with only 80 riders making the cut.

Back up in the breakaway group, Cousin decided to attack, as their gap had fallen to just 30 seconds. However, just as his fellow escapees were caught, he too was absorbed by the peloton just before the summit.

Following a cautious descent, Ilnur Zakarin (Katusha) made a solo attack on the Colla Micheri climb, only to be pulled back by the chase under the auspices of the American rider Joe Dombrowski (Cannondale-Garmin).

However, a quick response from Lampre-Merida, ultimately brought the race back together during the final kilometer, where Cimolai finished it off with a powerful sprint down the center of the road – to seize the win.