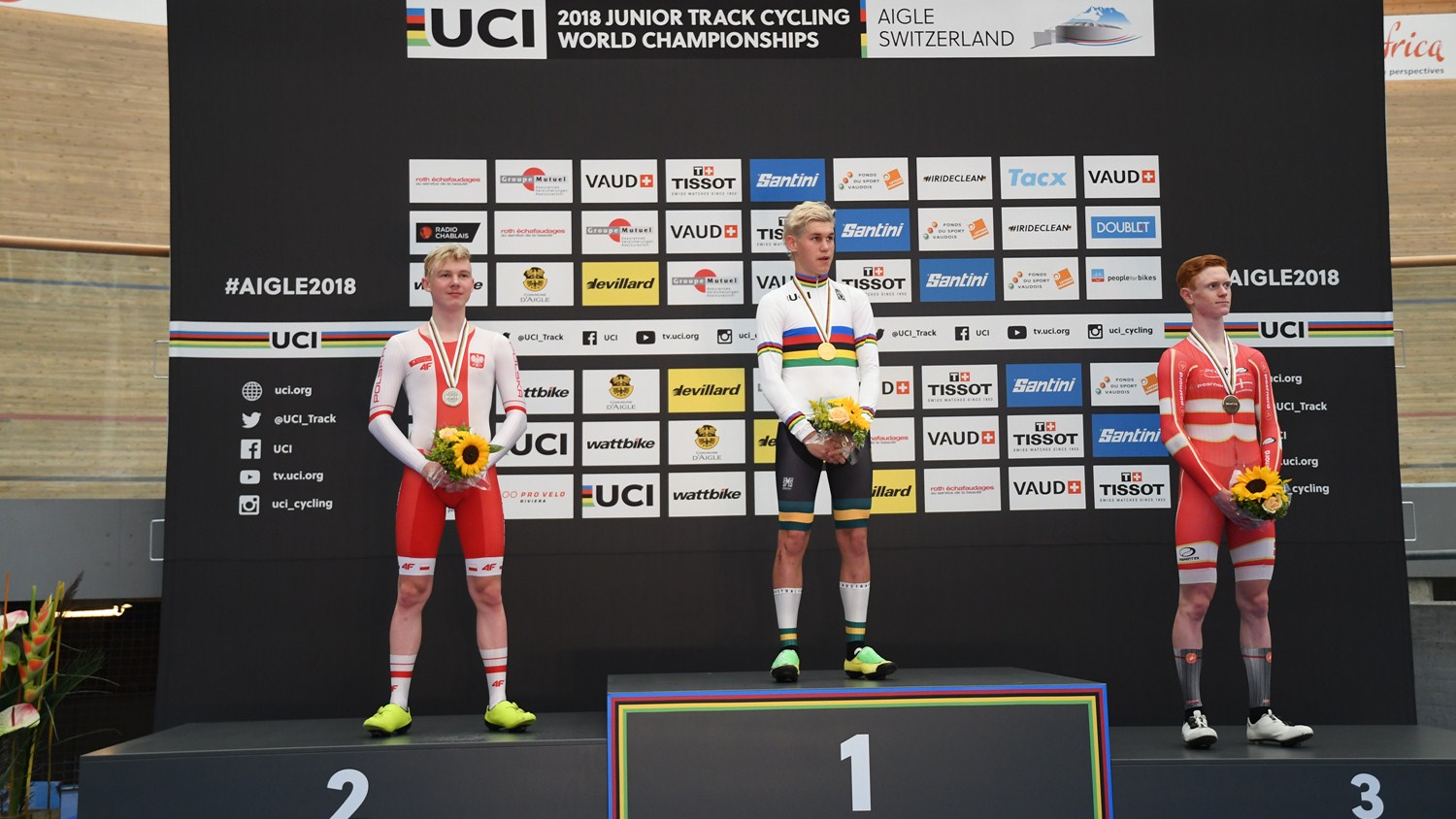 The velodrome of the UCI World Cycling Centre in Aigle, Switzerland, was the theatre of two world records during the Men’s individual pursuit qualification rounds. On the third day of competition at the UCI Junior Track Cycling World Championships, gold medals went to Russia, Germany, Italy and Australia.

The athletes in the men’s individual pursuit set the velodrome alight from the morning’s qualifying rounds.

Great Britain’s Ethan Vernon set an unofficial time of 3:12.226 to beat the world record, but had only a few minutes to savour his new-found status of World Record Holder. In the last qualifying round, Russia’s Lev Gonov lowered the new unofficial mark to 3:11.143.

The confrontation between the two men in the gold medal final just a few hours later was eagerly awaited at the UCI WCC velodrome. While the British rider took an early lead, Gonov took command from the half way mark to ride away with victory and the gold medal.

The new UCI World Champion said: “My opponent is very strong, and I know he has a faster first kilometre than me. I just wanted to ride fast enough to be sure he wouldn’t catch me. Just before the bell, I realised I would win and it was the same fantastic feeling as when I won the team pursuit with my team mates last year.”

Gonov was joined on the podium by fellow Russian Gleb Syritsa, who beat New Zealander Finn Fisher-Black in the bronze-medal final.

The points race saw a masterful demonstration from Australia’s Lucas Plapp who finished the 24km (120 laps) with 70 points, having lapped the bunch three times and earned extra points in intermediate sprints.

Assured of his victory several laps from the end, Plapp was able to enjoy his new title before crossing the finish line.  It was an emotional victory for the young Australian who was replacing team-mate James Moriarty, injured in a crash before the Championships began.

“I want to dedicate this victory to James,” said Plapp. “I am sure if he had been riding, he would have been on the top step of the podium. We already missed him in the team pursuit (Australia won bronze) and it was an extra motivation for me today wanting to win this for him.

“I only found out last night that I would be racing the points race and I stayed up really late watching videos of Cameron Meyer who has to be one of the best points racers in the world.”

He also paid tribute to his coaches Cam McFarlane and Matt Gilmore, who he said, “know all the ins and outs” and had been a tremendous help with his preparation.

Already gold medallist on the opening day in the team sprint, Germany’s Lea Sophie Friedrich made it look easy in the individual event, setting the fastest qualifying time and dominating all the rounds through to the finals.

“It might have looked easy but it wasn’t. It was very hard,” she exclaimed after beating China’s Jiafang Hu in two straight rounds in the final. “I was so very nervous before the final,” said the German, who last year won bronze in the same event.

The ride-off for bronze medal in Aigle went to three confrontations between Poland’s Nikola Sibiak and Germany’s Alessa-Catriona Propster.  After losing the first race, the Polish rider clinched the next two to to earn the third spot on the podium.

Third in the opening Scratch Race, the Italian went on to win the three remaining events and the overall classification.

“Yesterday I shard my joy with my pursuit team-mates and although today I raced without them, I still share my victory with them,” said Guazzini. “They were there supporting me and I thank them,” added the young athlete who suffered a scare in the Elimination when she crashed heavily.

“For a second I wondered if it was over but I could come back. I am so happy.”