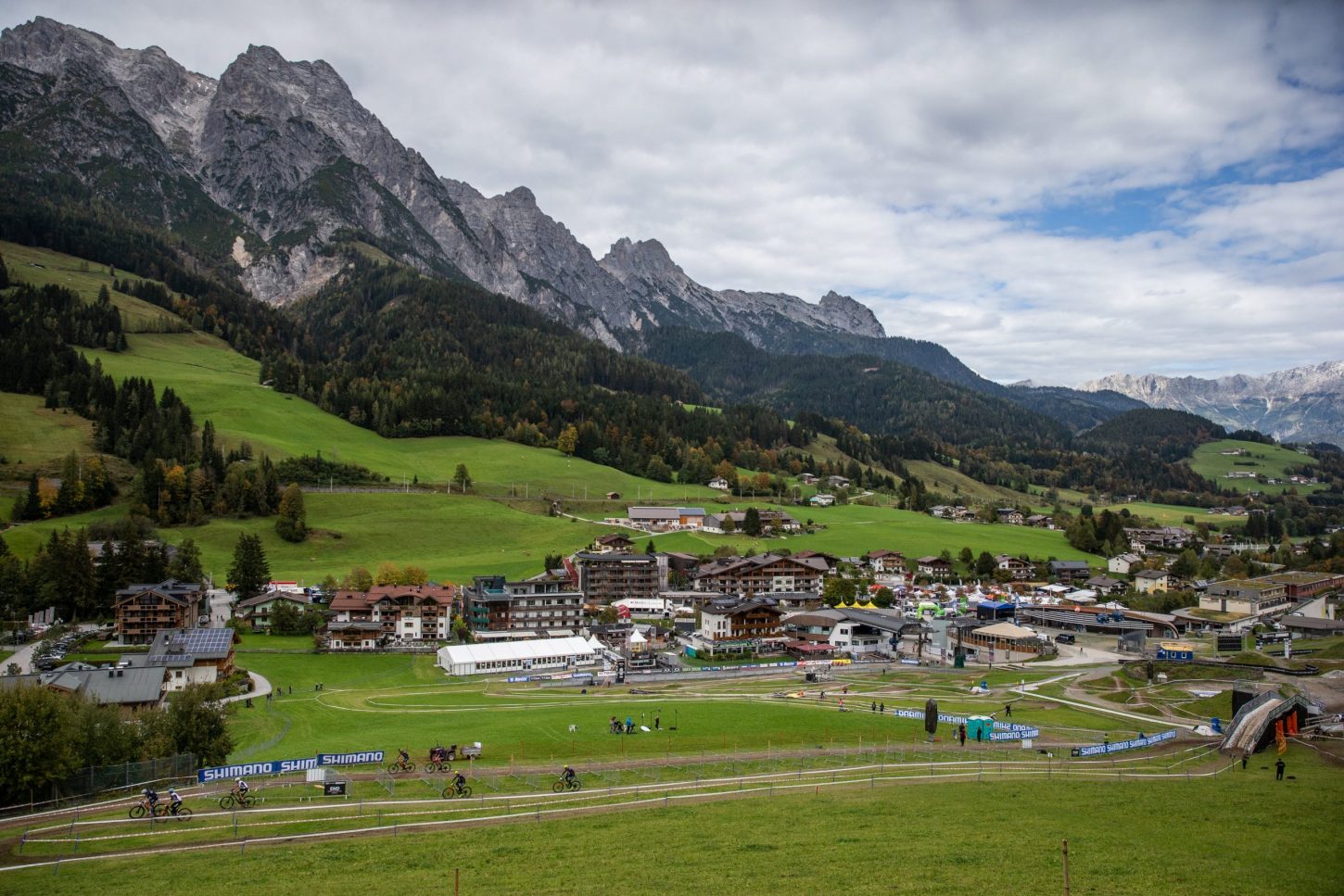 France secured two victories and a second place in a thrilling first day of the 2020 Mercedes-Benz UCI Mountain Bike World Championships in Leogang, Austria, that saw the first rainbow jerseys presented to the French relay team and to Thomas Pidcock (GBR) and Mélanie Pugin (FRA).

The first gold medals of the five-day event went to the French sextet of Loana Lecomte, Olivia Onesti, Lena Gerault, Luca Martin, Mathis Azzarao and the experienced Jordan Sarrou who were victorious in the team relay. With each outfit featuring Elite, U23 and Junior men and women, the race dynamic made for a fluid and exciting Championships opener.

France’s Nové Město na Moravě (NMNM) XCO UCI World Cup event winner Lecomte chased down the fading USA on lap 2 of 6, and pulled out a lead of more than 30 seconds over Austria on lap 3. Over the last 2 laps, the tide turned again, Austria taking the front on lap 5 before France fought back on the final lap, along with Italy and Switzerland.

Sarrou crossed the finish line – for his fifth team relay title – with a winning margin of 1’35”, as the Italian and Swiss riders followed for silver and bronze. Switzerland’s recent dominance in the team relay was halted and French pride reinvigorated ahead of a promising week.

Dispelling a common myth, UCI’s Off-Road Coordinator Gaël Suter explained the event was “Nothing easy for the athletes, but more racing and more fun for the riders”.

The field included Joren Van Eck (NED), an XC Eliminator specialist, rubbing shoulders with one of the breakthrough young XC riders Simon Andreassen – the 23-year-old Dane having recently won his first National Championships and his first XCO UCI World Cup within a week. Another youngster was Britain’s Thomas Pidcock, former U23 and Junior cyclocross UCI World Champion – who has signed to ride for UCI WorldTeamTeam Ineos Grenadiers from 2021.

It was the 2019 runner-up Jérôme Gilloux (FRA) who put on the early pressure on the first circuit of a 5-lap race, with only 22-year-old Joris Ryf (SUI), 43-year-old former road pro Martino Fruet (ITA), Pidcock and Andreassen keeping him in line of sight. Last year’s 4th and 5th place finishers Julien Absalon (FRA) and Charlie Mullins (USA) were lurking ominously in the top 10.

Onto lap 3, UCI ranked no 1 Gilloux had pulled out a 30-second lead, before Pidcock passed Ryf and gradually brought down the gap across lap 4. He hit lap 5 in the lead as Andreassen and Fruet overtook Ryf.

Pidcock’s winning margin was 35 seconds for his, and Great Britain’s first UCI E-mountain bike UCI World Championships title. It was heartbreak for Gilloux, having to accept the second step again, and a continued successful streak for the impressive young Dane Andreassen.

The women’s race was competed over four laps of the same 4.3km long course as the men, a modified version of the XCO route, with 310 meters altitude difference per lap, adding to the strategic challenge. It was another strong and varied field.

It was Schneitter (aged 34) herself who forced the early pace in defense of her precious stripes, with her Swiss compatriot Stirnemann (30) on her wheel and recent EWS-E winner Mélanie Pugin – one of two French riders along with 2019’s fourth-placed Nadine Sapin – nearby.

On lap 3 Pugin took the lead, with the two Swiss women in touch and a long gap developing to the rest of the field, with Rochette and Germany’s Sofia Wiedenroth the best of the rest. The Swiss riders switched positions and the gaps stabilized, as Pugin won by 27 seconds from Stirnemann, with Schneitter in third. The French rider took her first E-mountain bike UCI World title.