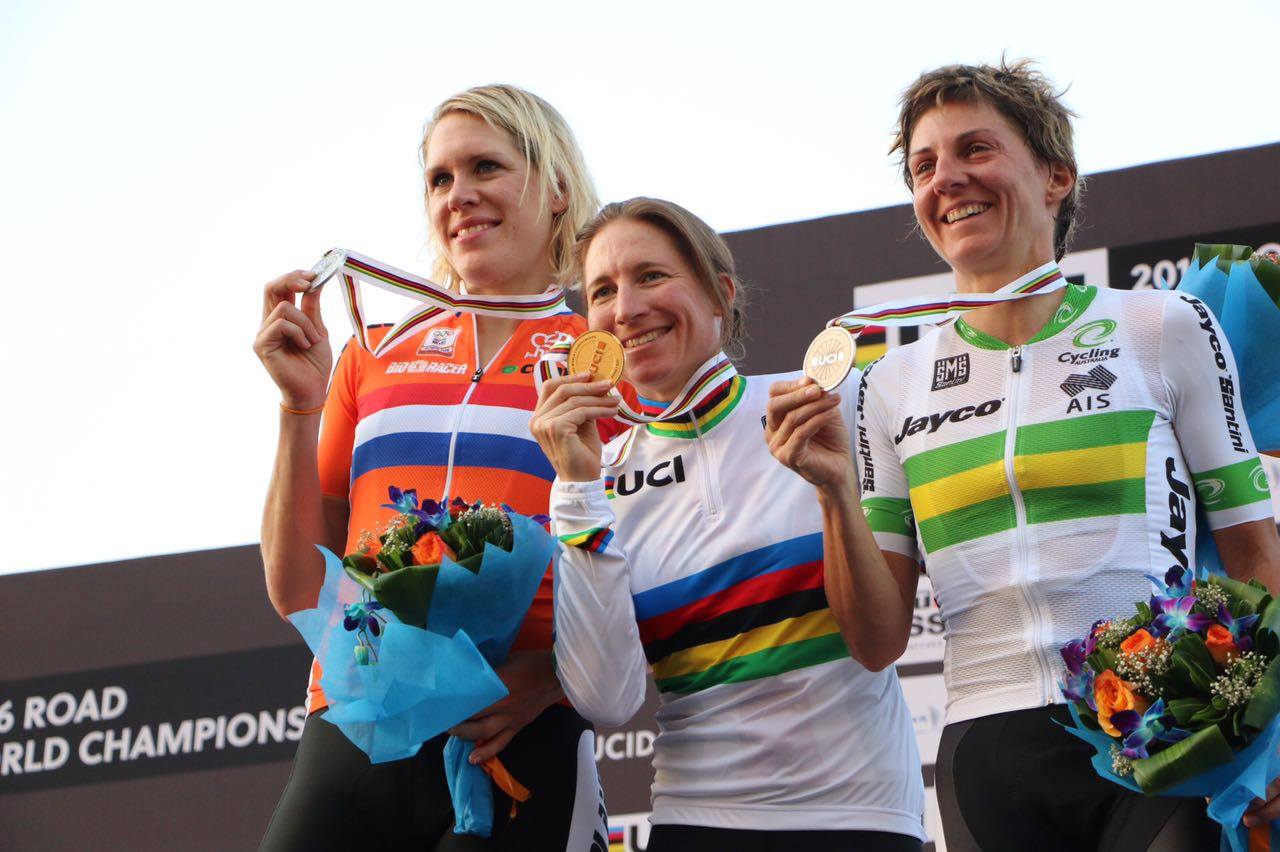 The USA swept the board on Tuesday’s races in the UCI Road World Championships, taking gold in the Elite Women’s time trial with Amber Neben and gold and bronze in the Junior Men’s event against the clock.

The oldest rider in the Elite Women’s event, Neben (41), already knew what it meant to triumph at this level thanks to her victory in the time trial at the 2008 Road World Championships. Eight years on, after a spectacularly close battle against another former UCI World Champion, Ellen Van Dijk, Neben clinched gold again by just six seconds.

Neben started out very strongly, clocking a 14 second advantage in the first time check against Germany’s Trixi Worrack. However, Van Dijk, only third at the first check, then soared ahead with a four second advantage before fading slightly to find herself six-seconds down by the third checkpoint. It was a nail-biting finish but Van Dijk did not manage to claw back those precious seconds and rode in for the silver medal.

For a while, Annemiek Van Vleuten looked like she could complete the podium, sitting in the provisional bronze medal hot seat, 25 seconds behind her Netherlands team-mate Van Dijk. Then, Olga Zbalinskaya (Russia) looked briefly like she would replace Van Vleuten in third place. However, the Russian faded at the finishing straight, allowing Katrin Garfoot, staging a storming comeback in the last segment of the course, to claim the bronze, two and a half seconds down on Van Dijk but over three seconds ahead of Zbalinskaya.

“It was a long wait, I think I used more energy sitting there waiting than I did on the bike,” Neben said afterwards.

Traditionally I am a pretty steady rider, I’m not real fast in the beginning so I try to just sustain it and be steady. The difference I think was the mental perseverance, to have that extra power to finish strong.”

“I was so nervous, it was so hard to watch. I feel for Ellen, but at the same time I’m so excited to be able to hold on.”

“I think this one is more special because of everything that’s happened between 2008 and now. There have been so many things I’ve had to persevere through. Just the struggle and being resilient and persevering, getting up and not giving up. I’m speechless.”

Even before Neben’s victory, the USA already had had much to celebrate at the 2016 Road Worlds when it netted both gold and bronze in the Junior Men’s time trial.

Brandon McNulty went two places better than his bronze medal on home soil in the USA’s Road World Championships in 2015, clinching the gold ahead of Denmark’s Mikkel Bjerg and his USA team-mate Ian Garrison.

The last rider of the 85 competitors to leave the start ramp on the 28.9 kilometer course, McNulty crossed the line a hefty 35 seconds ahead of Bjerg, with Garrison claiming bronze, 53 seconds down, and a narrow nine second advantage over another Danish rider, Julius Johansen.

McNulty looked set for success from the word go, clocking the first intermediate best time and then steadily improving on the rest of the field as the kilometres ticked by. Eight seconds fastest at the mid-way checkpoint, his lead stretched notably to 30 seconds at the third time check. At that point he wisely eased back a little to be certain of no last-minute loss of strength, finally claiming the win by a dominant 35 seconds. In the process, McNulty had passed the two riders who had started a minute and two minutes before him, underlining what was an emphatic triumph – and a big improvement on 2015.

McNulty is only the third American to claim a Junior Men’s road title after Greg LeMond in Buenos Aires in the 1979 road race and Taylor Phinney in the 2007 time trial.

“It’s incredible. Just looking back at the guys that have won in the past, it’s a pretty elite group and it’s impossible to describe what it feels like,” said McNulty.

“It was definitely toasty out but my home town is Phoenix, Arizona, so I’ve grown up in this kind of heat so it wasn’t too big of a shock. Ian and I have been doing some crazy heat activation over these past few weeks. It wasn’t fun but I felt like we were activated enough and we could handle it and push through it.

In what was a confirmation of McNulty’s superiority, Bjerg added, “It feels like winning because Brandon was so strong. He was just better than me so I’m really happy with this.”

In the best nations ranking for the UCI Road World Championships, the double Junior time trial success moved the USA into first place ahead of previous leaders Germany, a position which was then further strengthened by Neben’s gold in the Elite Women’s race. The USA now leads by 575 points over Germany with 467, while the Netherlands are in third place with 347 points.