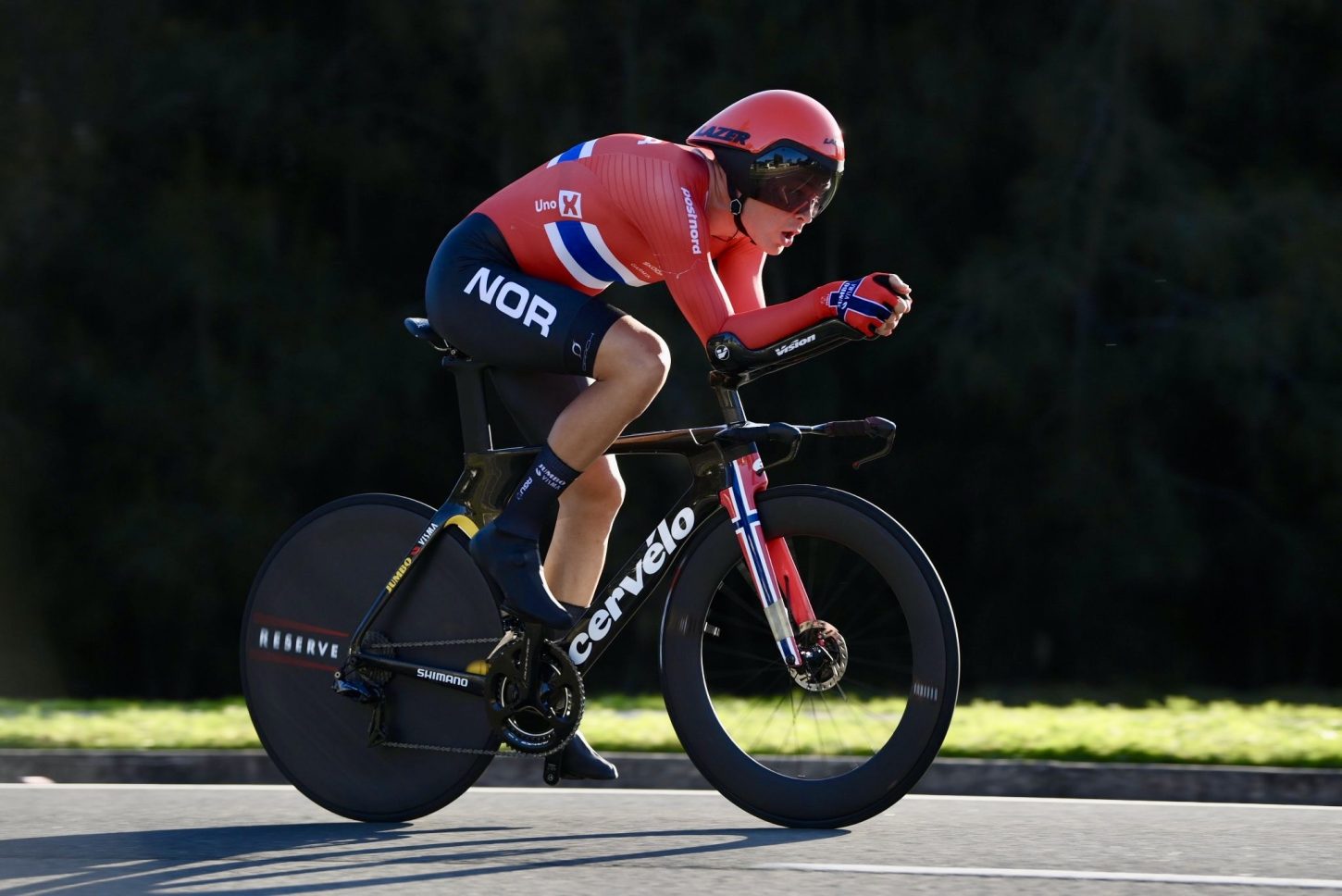 The 25-year-old Foss had never won a race outside his own national championships, but held his nerve on a sunny day in Wollongong.

There was no Wout van Aert (Belgium), but the field was stacked with talent with an early benchmark was set by Lucas Papp, with the Australian rider roaring across the line in 41:26.83.

“It was pretty amazing to be here, all I wanted to do was smile and soak up the atmosphere. Coming off the Vuelta only seven days ago, it was hard to get my body right. The last lap I got to enjoy it,” Papp said afterwards, admitting that he didn’t think he’d get a home World Championship again during his career.

Papp remained in the hot seat for a fair amount of time, the next big name to watch being Stefan Bissegger, who set off in the second batch of riders. The Swiss rider is the reigning European time trial champion having beaten compatriot Kung and Filippo Ganna (Italy) in Munich last month, which was enough to muscle himself into the pool of favourites as one to watch.

However, while Bissegger was on the course, Bruno Armirail (France) was starting to motor and found himself fastest through the second intermediate time check. The Frenchman wasn’t a fancied contender despite winning his national time trial back in June, but crossed the line nearly 15 seconds quicker than Papp to end the Australian’s chances of a win on home soil.

Armirail himself wasn’t even off his bike before his time was beaten by the narrowest of margins, Belgian Yves Lampaert pipping him by four tenths of a second. While there was next to nothing between those two, Bissegger was gaining, gaining and paced himself beautifully to slot into first place by a decent 22 seconds.

Bissegger’s time withstood the challenge of the third set of riders, but the fourth set included the likes of Kung, Ganna and recent Vuelta winner Evenepoel. And to add to the drama, the wind dropped and gave those starting later the calmest of conditions.

Ethan Hayter (Great Britain) went through the first time check with the fastest time. But as the drama was unfolding, disaster befell Hayter as he lost his chain, the ensuing bike change rendering his chances long gone.

Tadej Pogacar (Slovenia) can never be discounted but he was 15 seconds down at the first check, with nothing in it between Ganna and Evenepoel. All eyes were on the last handful of riders, but there was more drama unfolding ahead on the road as Magnus Sheffield (United States) wiped out and ended up on the wrong side of the barriers. He did finish and wasn’t too far off on the time sheet, giving a sense of what might have been without that crash.

Foss crossed the line next to take the lead in 40:02.78, averaging 51kmph with pain etched on his face as he gasped for breath having given his absolute all. Pogacar was losing time behind, his better chance likely to come in the road race. Evenepoel was tucked as low as he could be, as he came through the second time check 15 seconds down.

While Kung was flying, Ganna was not. The Italian rider wasn’t in his usual form, so it looked like it was coming down to Kung versus Evenepoel against the time set by Foss.

Hayter slotted into second, another rider rueing bad luck on a day where he might have challenged. But Kung was in the mix and as he powered across the line the clock was ticking down, and went into the red. Foss could barely hide his emotion, hiding his head in his hands as he was guaranteed silver.

It was all on man of the moment Evenepoel. But he was dropping time and couldn’t even pip Kung, slotting into third. Foss began to celebrate with only Ganna on the course, the Italian losing time with every turn of the pedals. The former world champion crossed the line and could only grab seventh, with Foss seizing the World Championship time trial title.

“I don’t believe it, it doesn’t feel real. Man, this is more than I can ever dream for,” the Norwegian said afterwards with shock etched on his face.

“I will really enjoy it but first I have to believe it. I really felt I got out everything I could today, I couldn’t do anything better. This is unbelievable. It was a perfectly executed race.”