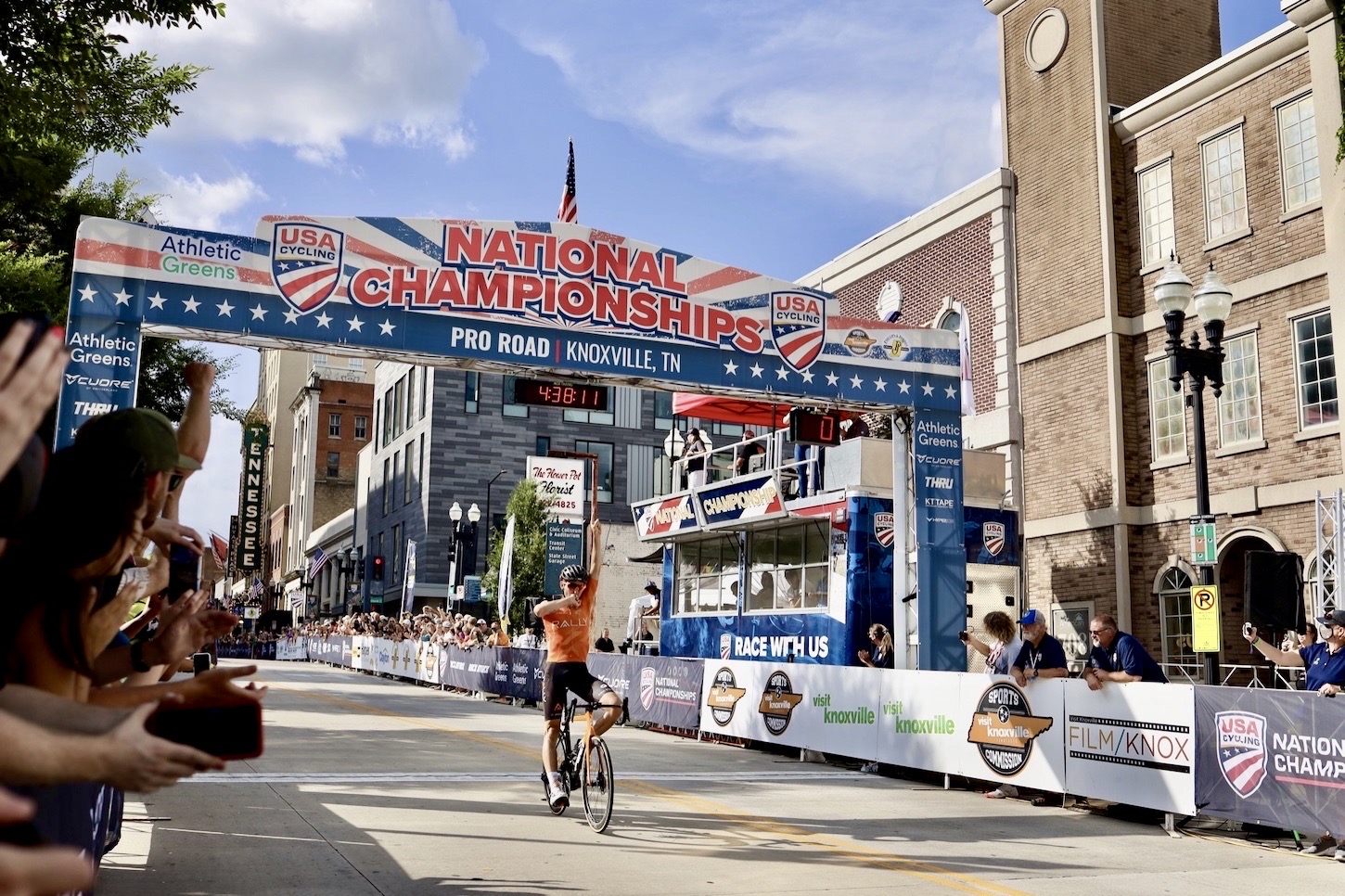 A 146-rider field, the largest field for this event in at least the last 15 years, started with a bang, with an attack within the first six kilometers. A group of eight, consisting of Lawson Craddock(Austin; EF Education-Nippo), Gage Hecht (Parker, Colo.; Aevolo), Chad Haga (Fort Collins, Colo.; Team DSM), Colin Joyce (Pocatello, Idaho; Rally Cycling), Ty Magner (Athens, Ga.; L39ION of Los Angeles), Magnus Sheffield (Pittsford, N.Y.; Rally Cycling), Tejay van Garderen (Los Olivos, Calif.; EF Education-Nippo), and Matthew Zimmer (Des Moines, Iowa; Project Echelon), were able to get a lead of almost thirty-seconds. They maintained their lead for half of a lap before being joined by the foursome of George Simpson (Fort Collins, Colo.; Project Echelon), 2018 winner Jonathan Brown (Covington, Tenn.; EVO Racing), Jack Bardi (Tacoma, Wash.; Gateway Racing Devo), and Alexey Vermeulen (Pinckney, Mich.; Canyon-Shimano – Q+M) before being absorbed by the field. Within a lap, Sam Boardman (Washington, D.C.; L39ION of Los Angeles) and Kyle Murphy(Townsend, Vt.; Rally Cycling) attacked off the front and pulled away from the peloton. Simpsonbridged over to the leaders with ten laps remaining. The trio maintained their lead through much of the race, getting their lead above the field to over four minutes.

“Luckily, I was with Sam Boardman, who is the world’s strongest bike racer, and then George [Simpson] came up, and honestly, it was just smooth riding with them. I think we probably saved energy and didn’t have to ride hard on the hill every lap. I just decided to try to hang out there as long as possible to give our guys a free ride,” said Murphy about being on the front for almost half of the fifteen-lap event.

The field allowed the trio of leaders to maintain their lead for the next five laps. A chase group of six, Brent Bookwalter(Ashville, N.C.; Team Bike Exchange), Gavin Mannion (Fort Collins, Colo., Rally Cycling), Craddock, Haga,Sheffield, Rosskopf, and Vermeulen, began the process of reeling the leaders back. The groups merged with three laps to go, creating a sustainable group of nine. The group would fend off multiple attacks, but Rosskopf attacked right before the final lap and dangled in front of the remaining riders for the lap. He maintained his position through the last 12.6 kilometers and claimed the U.S. title as his own.

“We divided the team into the first and second half of the race. Just to give an opportunity to a few guys to try to float as much as possible, you know, without taking themselves out of the race. But just save, conserve, conserve, conserve until the second half,” said Rosskopf. “It worked amazingly, and so it’s hard to win this because if you don’t have the numbers, all the strongest guys are just staring at each other.”

This is Rosskopf’s third professional national title and first in the road race. He previously won the time trial in 2017 and 2018.