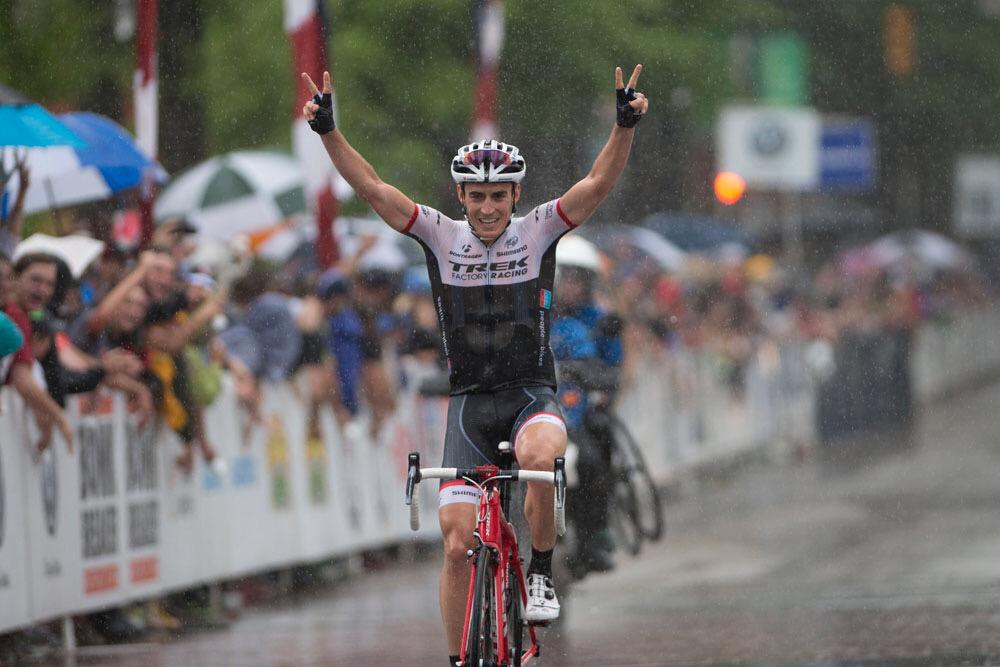 Busche outsprinted Joe Dombrowski (Marshall, Va./Cannondale-Garmin Pro Cycling) in the final moments of the men’s pro road race to win his second Stars-and-Stripes jersey since 2011, holding up two fingers as he crossed the finish line in a steady downpour. He clocked a 4:35:21 afternoon on the 111.4-mile course, besting Dombrowski’s 4:35:26 effort and Kiel Reijnen’s (Boulder, Colo. UnitedHealthcare) bronze medal-winning 4:35:40 run.

“It’s just special,” Busche said. “There’s only one guy per year who gets to wear the colors of their country. It’s an honor and a privilege, and I hope that I represent it well for the country. I’ll race my hardest for me, but also to represent the U.S.”

Saturday’s individual time trial winner Andrew Talansky (Napa, Calif./Cannondale-Garmin Pro Cycling) spent more than half the day on a solo break that extended to almost two minutes ahead of the chase at times, pushing the issue for nearly 60 miles. When the eventual King of the Mountain winner was finally caught, the men’s field had whittled to just 20 riders, and a small break of six riders formed. Busche worked with Phil Gaimon (Tucker, Ga./Team Optum p/b Kelly Benefit Strategies), Chris Horner (Bend, Ore./Airgas-Safeway Cycling) and Gavin Mannion (Austin, Texas/Jelly Belly p/b Maxxis) to pull Talansky back into the field. Dombrowski and Reijnen managed to podium despite some bad luck, as the former got caught up in a wet road wreck that claimed Jonathan Hornbeck (Temecula, Calif./Hincapie Racing Team) and John Murphy (Horse Shoe, N.C. UnitedHealthcare), while the latter suffered a flat that undoubtedly robbed him of Stars-and-Stripes contention.

“Everybody out here today gave it their all,” Busche said. “To be the strongest on the day, or maybe you played tactically better or whatever it is to win, today was a hard race, hard conditions, hard course. Just to win knowing that you gave it your all is really the best feeling.” 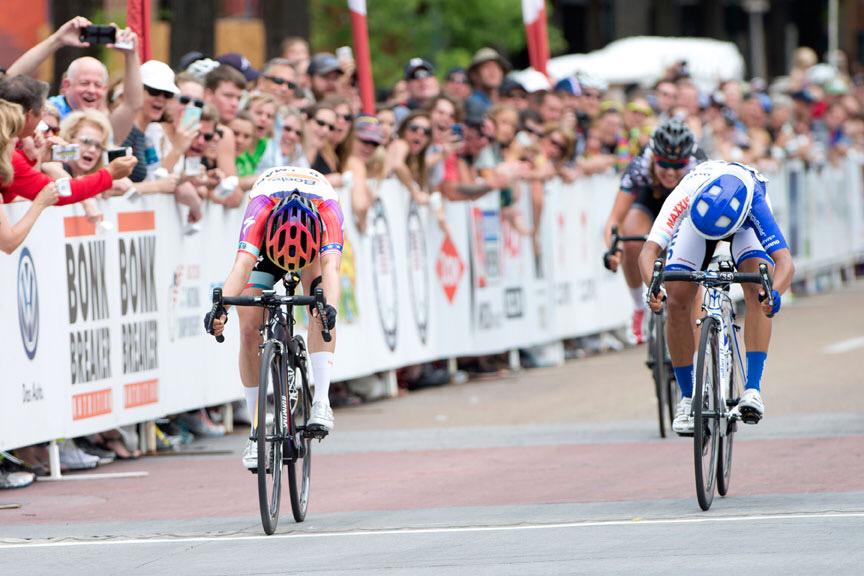 “It was a long sprint and it was a headwind,” Guarnier said. “I don’t get too many opportunities to sprint, so I just kind of had to go by feel. For sure it was a long sprint because Coryn was coming up in those final 100 meters after hitting it in the headwind.”

Guarnier took the final corner just ahead of Rivera and topped the UHC rider to take the win by half a wheel with Wiles just behind. All three recorded 3:06:48 finishes.

Evelyn Stevens (San Francisco, Calif./Boels Dolmans Cycling Team) earned Queen of the Mountain honors after making it up Lookout Mountain third on the first pass, then first on the second, collecting 15 points along the way. Like Talansky, Stevens courageously went solo for an extended portion of the contest, which allowed her teammate to conserve for the sprint finish.

“I knew after Evie’s move at the end, I really had to finish it off for her,” Guarnier said. “Evelyn’s strong enough to hold them off—we’ve seen that in the past—so it could have gone either way for Boels Dolmans.”

The second climb up Lookout Mountain produced the deciding selection, as Guarnier, Rivera, Wiles, Stevens, Katie Hall (Oakland, Calif. UnitedHealthcare) and Amber Neben (Lake Forest, Calif./FCS Cycling-Visit Dallas p/b Noise4Good) broke off the front. Hall was dropped off the front group in the final two laps, and the finish came down to the three podium winners and Neben just four seconds back.

“It’s an honor to represent the Stars-and-Stripes over in Europe,” Guarnier said. “Every time I’m over there, I’m honored to race for the United States, but to be able to wear that jersey over there again, hopefully it will raise my game even more.”