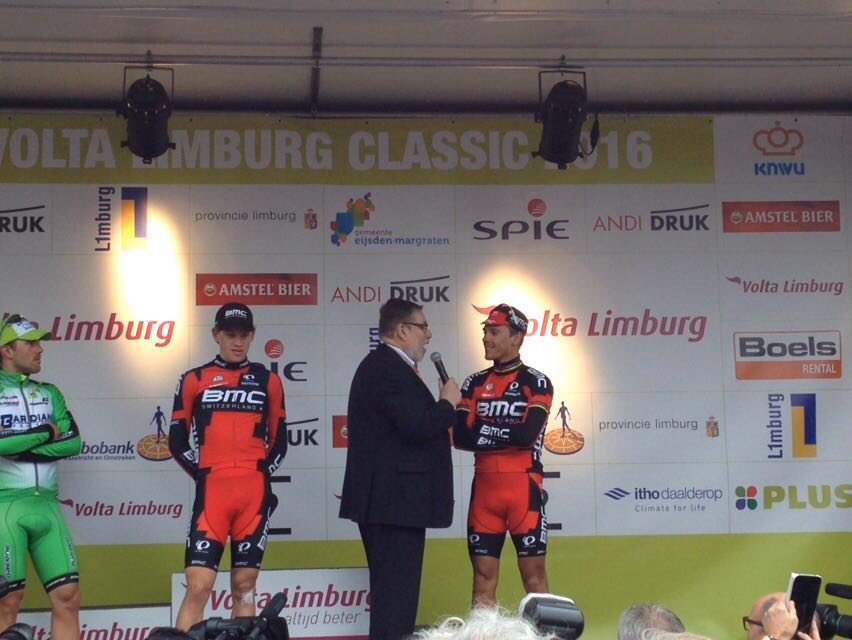 Floris Gerts stormed home to take his first win as a professional rider at Volta Limburg Classic today, in what was a race controlled by the BMC Racing Team.

“There wasn’t really much wind. We just made sure that we were riding up the front and didn’t have to chase two big groups. There was a breakaway and Tom Bohli and Manuel Senni did a great job controlling the group and this was really important. After they did this, we could race with the really strong efforts of Dylan Teuns and Loic Vliegen in the front group. They made the race really hard and after this, I decided to attack because I felt really strong. I went with Rick Zabel and from that moment I gave it everything. I was feeling so sick on the bike and then Philippe Gilbert, Loic and Dylan came to the front and then it was an unbelievably good situation. In the last kilometer Philippe pushed me a little so I attacked again. The other guys behind me weren’t really chasing but I don’t really know what happened behind me. I kept going and I got to the finish line. It felt like all of the other riders deserved the win just as much, so it really was a team effort. I cannot describe it better than that.”

Bialoblocki would later suffered a puncture at the 68 kilometer mark, but the Polish rider was able to regain contact with the group.

Back in the peloton, there were a flurry of attacks and counter-attacks throughout the day, with riders such as Alex Kirsch (Stölting), Manuel Senni, Davide Rebellin(CCC) and Philippe Gilbert (BMC), doing an exemplary job of leading the chase, and chipping away at the escapee’s advantage.

What remained of the day’s breakaway group was eventually reeled in during the final 20 kilometers, leading to attacks from Jos Van Emden (LottoNL), Dylan Teuns and Sonny Colbrelli, along with Gilbert who also made the juncture during the final 12 kilometers.

At the first passage of the finish line with 6 kilometers to go, the gap was still around 10 seconds and it was BMC doing most of the work back in the chase.

The chase got more organized as ONE, LottoNL-Jumbo and De Rijke hit the front. However, they were still 15 seconds behind with 3 kilometers  to go.

However, just after the 2 kilometer mark, BMC decided to play its first card when Gerts attacked.

With four teammates to control the group, he extended his advantage and had a solid gap at the passage of the flamme rouge.

Inside the final kilometer, Colbrelli made a final desperate attempt to get back, while Gilbert struggled to stay on terms with the Italian rider.

However, Gerts had enough of an advantage to claim the victory while a frustrated Colbrelli had to settle for a third second place, followed by  Gilbert who crossed the line in third.