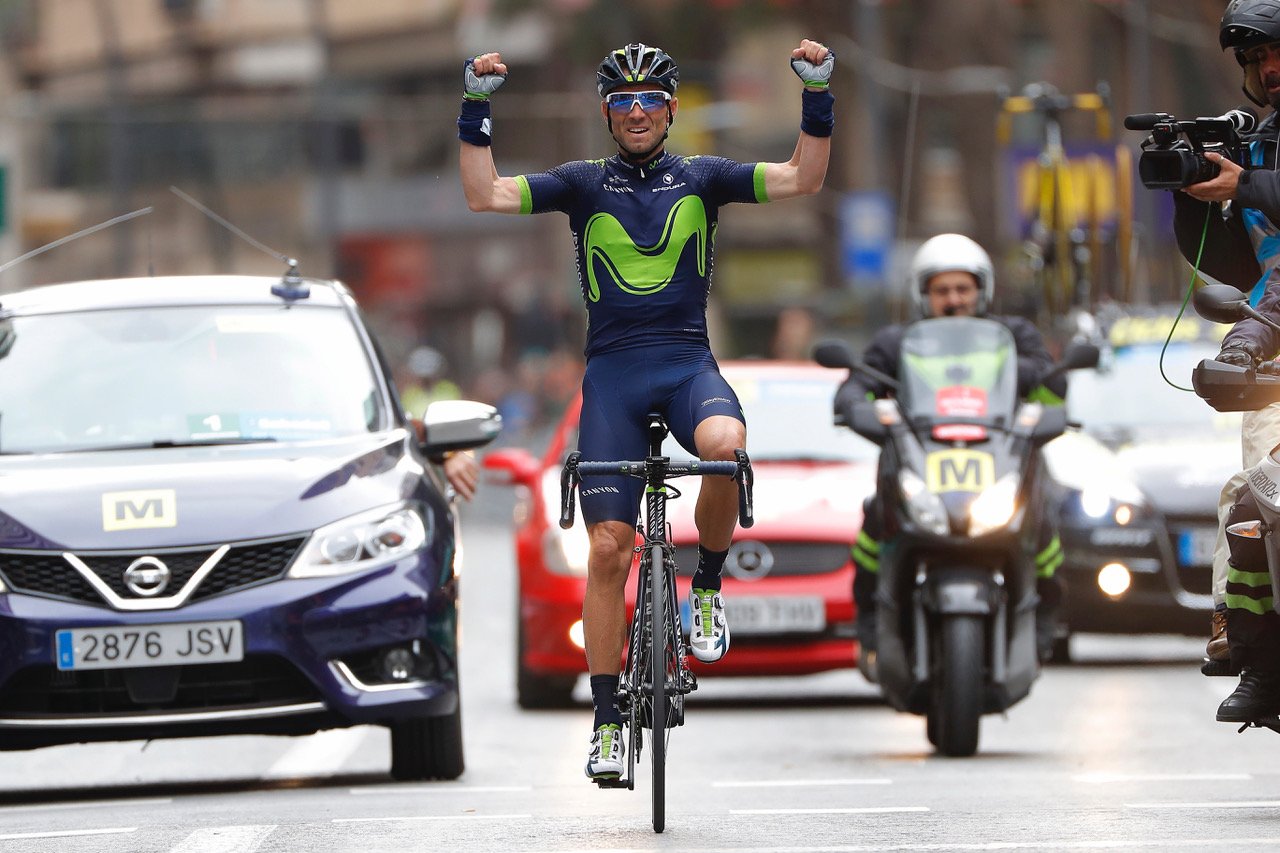 Alejandro Valverde (Movistar Team) won the 37th edition of the Vuelta a Murcia today, after finishing minutes ahead of the peloton to claim a solo victory.

The Spanish rider attacked with 70 kilometers remaining, and proceeded to keep the peloton, which was being led by the Lotto-Soudal duo of Tony Gallopin and Tiesj Benoot, at bay until the finish.

Heading into the city of Murcia, Valverde’s lead over the peloton remained stable at just under three minutes, ultimately proving too great a gap for the chase to close down on the Movistar rider.

As a result, Valverde eventually crossed the finish by more than two minutes over the peloton, while Katusha’s Jonatan Restrepo won the sprint for second place, followed by Patrick Konrad (Bora-Hansgrohe), who completed the podium in third spot.

In 2014, the Movistar rider won the second edition of the race, after it had become a one-day event.

“It really was hard, mainly because of those strong headwinds in the later part of the race down to Murcia. I had planned to jump from the bottom of the Collado Bermejo, and I had my team-mates pushing hard from the Aledo part of the climb, but I was really hoping for someone to come from behind and take some turns with me. In the end, I saw I was alone and I told to myself: ‘I keep going on the descent, and should they catch me, maybe I can go for it in the sprint, and shouldn’t they, I win’ – and I made it to the finish. I just had to give it a try, even it it was so far away from the finish and it was a long shot, but that was the only point where I could win solo from. I took that chance, and I succeeded”, said Valverde.

“It’s always special for me to win on home roads – this victory goes to all the people in this region, who always cheer for me so much when I’m racing abroad. It truly is the most beautiful of the five I’ve achieved here: it was a big effort and so tough to keep up against the wind and the climbs to win here. After Nairo’s success in Valencia, things are looking really promising for us this season – it’s just taking from where we left, after we won those four consecutive WorldTour titles all the way up to 2016. Now it’s about having some rest and taking the start of the Ruta del Sol on Wednesday. There, we’ll find Alberto Contador and many other big riders, and we will have to try and continue with this streak”, he added.

The strong winds caused a split in the peloton early on in the race, with Sam Bewley (Orica-Scott), Evan Huffman (Rally Cycling) and Jelle Wallays (Lotto Soudal) managing to ride clear.

However, a determined peloton led by Team Movistar eventually reined in the escapees at the base of the climb of the Alto Collado Bermejo.

From there, Valverde made his way to the front, later attacking at the bottom of the climb.

Jon Izaguirre (Bahrain-Merida), Benoot, Gallopin, Simon Spilak (Katusha) and Garikoitz Bravo (Euskadi) would attempt to follow, however, the quintet failed to get on terms with Valverde, who took advantage of his knowledge of the route and forged on alone.

With 35 kilometers to go, Valverde was holding on to an advantage of almost two and a half minutes, while the remaining chase group was  ultimately reclaimed by the peloton.

Valverde went on to celebrate a solo victory in front of his local crowd, finishing just a little more than two minutes ahead of the peloton.