What’s In Your Drink? 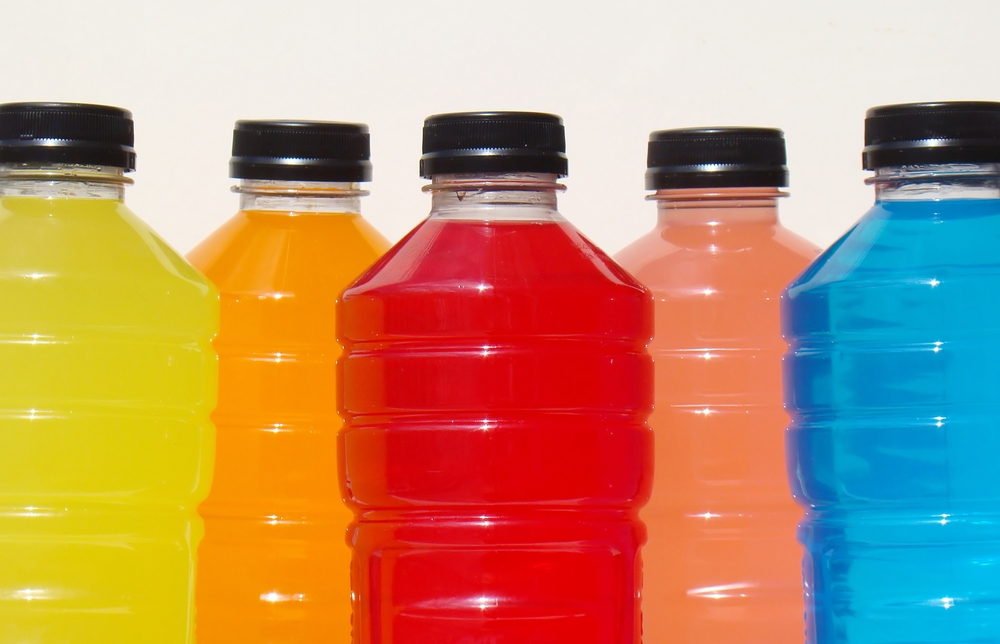 What’s In Your Drink?

Last year, Dr. Stacy Sims did a blog post about ingredients found in different types of sports drinks and how they can impact hydration and performance. Here’s a repost.

The first thing I see when people pick up a container or packet of sports drink mix or electrolyte tables is that they read the ingredients label. Do you wonder what it is that you are actually putting into your body? Electrolytes.. sure, but what compound? citrate? chloride? chelate? What about carbohydrates and sweeteners? Maltodextrin? Fructose? Xylitol? Stevia? Sucralose? And anti-caking or flow agents? Sodium benzoate? polyethylene glycol? Flavors: Natural and artificial? (what does “natural” mean anyway……..?)

Here is a chart showing a comparison of Osmo Hydration to some of the top selling sports drinks:

Notes: **Both the Health Protection Branch of Canada and the Food and Drug Administration note that sodium benzoate is safe to consume in small doses, but it should not be combined with ascorbic acid, commonly known as citric acid or vitamin C, as this will develop a carcinogen know as benzene. This carcinogen is believed to cause cell death, damage to the mitochondria in cells, DNA damage, ***Polyethylene glycol is the basis of most prescription laxative

What does this all mean?
The primary goal of the maltodextrin+protein drink and the typical maltodextrin:fructose sports drink are to provide calories, aka liquid calories. The two sugars used are maltodextrin and fructose: both of which cause water to be pulled into the small intestines due to the increased osmotic/oncotic pressure they exert. Yes, maltodextrin will allow the products to have a low osmolality and allow for more rapid exit from the stomach, but it wreaks havoc in the small intestines. They also employ artificial sweeteners: xylitol and sorbitol. The sugar free electrolyte tablets are working to provide a low carbohydrate, hydration formula, however they have added sucralose and sorbitol (artificial sweeteners) with additives such as polyethylene glycol which promote GI distress (see note above).

– Sugars: What about Maltodextrin and Fructose?

Artificial Sweeteners: For starters, they don’t facilitate the uptake of fluid- you need a bit of glucose and sodium to actually work with the physiology of the small intestines to pull fluid in (glucose-sodium co-transport system). Then, depending on the type of artificial sugar, you can have changes in osmotic/oncotic pressures, which can pull water into the GI tract out of the blood. For example, sorbitol, mannitol and xylitol are all sugar alcohols- they are used as laxatives in the general population because they do pull water into the intestines. Sucralose induces an insulin spike- or rather, your body perceives sweetness and in response, releases insulin in anticipation of the sugar to come; but none does; thus your existing blood glucose gets taken up – dropping blood glucose, causing a bit of hypoglycemia, signaling your body to release more glucose into the blood- which causes insulin to be released.. around and around it goes. Yes, during exercise, insulin doesn’t play a large role in blood sugar control, BUT ingesting products with sucralose can make you “bottom out” your blood sugar (kind of like taking in lots of caffeine) more quickly- thus your carbohydrate requirements increase. Sucralose is also strongly linked to GI distress (diarrhea, bloating, gas).

Electrolytes: The electrolyte compounds used are chlorides and carbonates (for the most part).

– Chlorides: When the chloride separates from the potassium or sodium it becomes a potential disruptor to the small intestines (i.e. alters the membrane potential of the intestinal cells, allow the cells to “open up”/become leaky, causing GI distress and diarrhea).

– Carbonates: Sodium bicarbonate is the only really useful carbonate-compound in that it is used in the body’s naturally occurring bicarbonate buffering system.

– Citrate-bound calcium, magnesium, potassium, and zinc are readily absorbed by the body (no by-products) as the electrolytes are used for key muscle metabolic processes and the citrate is used in aerobic metabolism.

Why is OSMO different (and why are there often “floaties” in my drink after I mix it up?!)

OSMO is formulated to promote hydration, not fuel/carbohydrate absorption. There are quite a few critical differences between the aforementioned products and OSMO.

1): The Preload is a hyper-hydration and buffering agent drink. The Hydration is a 3.5% (men) to 3.8% (women) solution designed to push as much fluid into the blood, and NOT provide calories/carbohydrate for fuel. Again the focus is hydration, not fueling. The Protein (Recovery) is designed to give the biggest protein bang in a short window to rapidly shut down cortisol and all the catabolic stressors associated with exercise- thus maximizing adaptations and recovery.

2): The sugars used. OSMO uses a ratio of glucose:sucrose in all of its formulas to maximize fluid absorption before and during exercise; and glycogen resynthesis post exercise. The sugars are also vegan; meaning we source sugar that has not been processed cattle bonechar as the decolorizing filter!

3): The electrolytes. We use citrate based compounds except for sodium bicarbonate in the Preload. The functionality of the bicarbonate is why it is in Preload: It is an anaerobic buffer (more on this below). Sodium citrate is another alkalizing agent shown to improve anaerobic and aerobic performance. Similar to sodium bicarbonate, sodium citrate works by offsetting the increase in H+ by providing a greater buffering gradient and increases blood pH significantly. Moreover, sodium citrate can be ingested in higher doses without the adverse gastrointestinal distress often associated with sodium bicarbonate or sodium chloride ingestion. Sodium citrate also works upon molecular disassociation- the sodium pulls water into the plasma space and the citrate works both as an alkalizing agent (above) but also as the precursor enzyme for the Krebs cycle (aerobic metabolism).

4): I was heavily pregnant with my daughter when we were sourcing the ingredients for all our OSMO products. In this vein, I did not want to put anything on the market that I couldn’t consume pregnant. This is why we do not use bonechar sugars, why we source our protein from only the three countries in the world that never introduced hormones in the dairy system. This guarantees protein that is “rBGH-free”, “rBST-free”, GMO-free, and not processed with MSG. We use organic fruit powder for flavor, not a “natural” flavor or other flavor enhancers that are ladened with maltodextrin. This is also why you will find sediment or “floaties” in our products. (You’ll find real fruit seeds and vanilla bean!). We also do not implement fillers, anti-caking or flow agents to have a uniform mixability or a “clear” solution. I don’t want to consume silica, calcium silicate or other weird agents, do you?

If nothing else, know that when you drink OSMO you are drinking something that your physiology recognizes as a functional solution; everything in the products are chosen carefully from many different angles. Dr. Stacy Sims, MSc, PhD, is the chief research officer and a co-founder of Osmo Nutrition. Stacy is an exercise physiologist and nutrition scientist with almost two decades in the field and is also a longtime endurance athlete.

Stacy’s endurance career started when she ran cross country races in high school. She went on to race crew for Purdue in college, was an ultra runner and raced the Kona Ironman triathlon in her late twenties. More recently she raced as a pro-elite roadie and in the Xterra Worlds. Stacy’s interest in sports, health, and nutrition has long driven her research subject matter. The topic for her PhD study came to her deep into the Ironman’s Kona, Hawaii race course and this jumpstarted her PhD studies in thermoregulation and hydration at the University of Otago in Dunedin, New Zealand. She promised herself she would give up Ironman competition for the duration of graduate school, but still raced her bike.

Stacy moved from New Zealand to the Bay Area in March 2007 where she was recruited to work as the exercise physiologist in the human performance lab at Stanford University. She then moved into disease prevention research to continue her studies in thermoregulation and nutrition across all populations (including sedentary obese individuals and elite athletes). Outside of her work at Stanford and at Osmo Nutrition, Stacy works with individual endurance athletes to help them dial in hydration and nutrition to boost their performance and succeed in their sports. Stacy also consults for the USA Cycling Women’s Track endurance program, USA Cycling BMX, Xterra champion Dan Hugo, individuals of Team Tibco and the Webcor professional women’s cycling, Matt Dixon of Purplepatch Fitness, and Craig Upton of Performance Labs HC.

Stacy worked with Garmin-Slipstream for the 2009 Tour de France, assisted Lance Armstrong in researching thermoregulation in 2010, and with Andy Schleck for nutrition and thermoregulation in 2011. Stacy believes that exercise stress adaptations and nutrition go hand in hand, thus knowing the explicit demands of each mode, duration, and intensity of exercise are predictors of just which nutritional alterations benefit an individual the most, whether related to improving performance, preventing injury, rehabilitation, or general health.