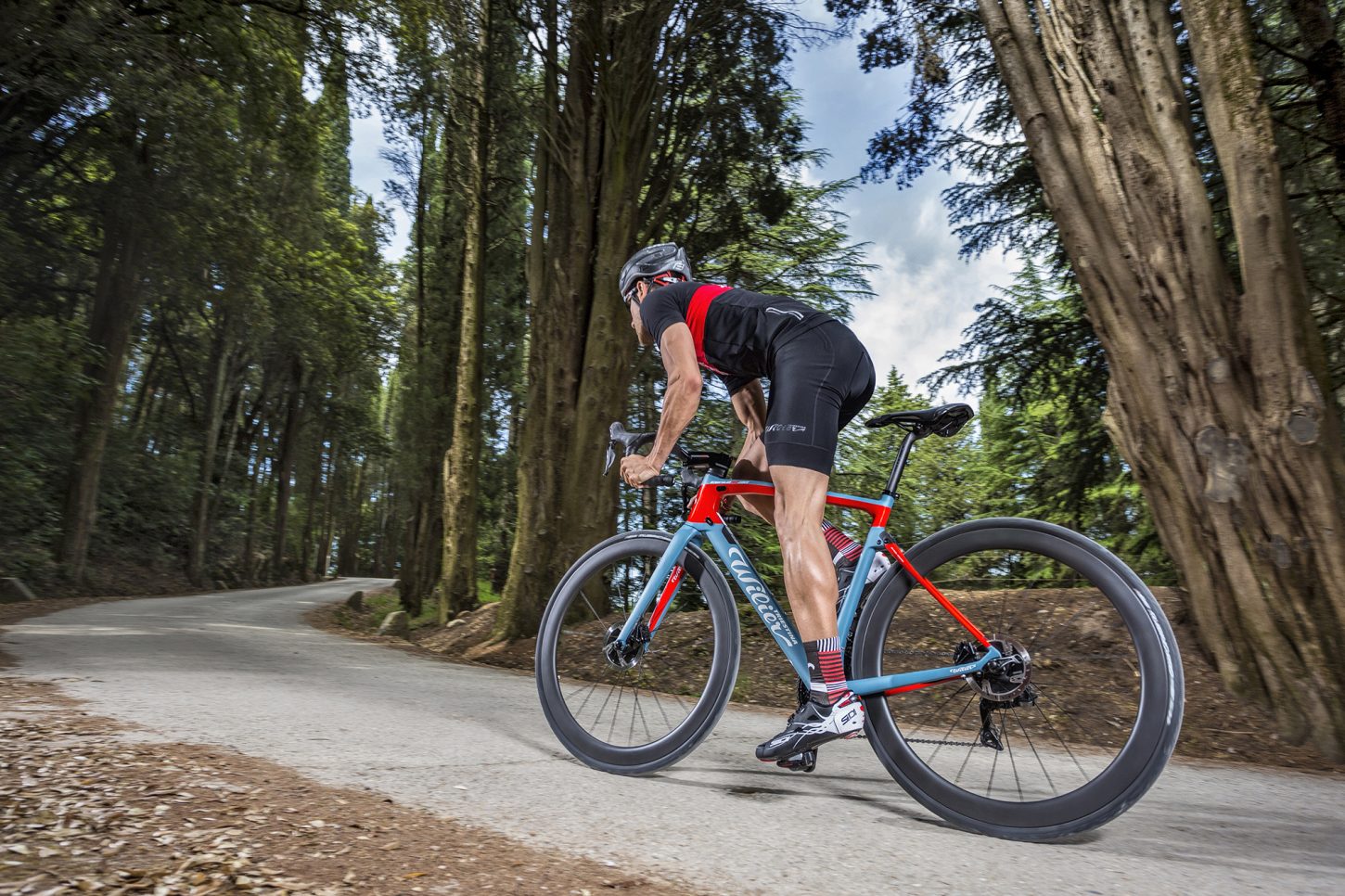 Now that disc brakes, thru-axles and wider tires have come to dominate the road bike segment, all of which are aimed at providing the inveterate roadie with more comfort and versatility, it makes sense that companies are now turning their attention toward developing different types of active suspension systems as a means of increasing those attributes as well.

However, unlike the competition that seems preoccupied with sending prospective riders over cobblestones or across gravel as means of justifying their latest far-flung suspension contrivance, Wilier created its new Cento10NDR simply as a means to make what’s already good about road riding – better.

‘It’s a road bike,’ says Claudio Salomoni, product manager for Wilier. ‘It’s a race machine, only it’s more forgiving because of the geometry and because the rear stays are very, very comfortable.’

It’s not just a question of age,’ adds Salomoni. ‘It could be that you are 30 but have problems with your back. If you want something premium but cannot fit the racing geometry, you can still have it.’

Using a new suspension system Wilier calls its ACTIFLEX, the Cento10NDR’s chainstays and seatstays are comprised of a one piece design, wherein the seatstays join the seattube via an alloy ‘link’, which contains a high tech elastomer block that acts like a shock absorber.

Wilier refers to this as its Shox.

For instance, when the rear wheel hits a bump or travels over rough terrain, the seatstays are designed to flex upwards, whereby the Shox  absorbs and rebounds the impact away from the rest of the frame.

A close comparison to Wilier’s ACTIFLEX, is Pinarello’s recent elastomer system, which is used on its K8-S road bike. However, unlike Pinarello’s design, which uses a considerably narrower cylindrical elastomer that attaches to the seatpost, Wilier’s Shox is a much larger unit that is held in place using actual hardware. Wilier says this ensures the Cento10NDR’s ability to maintain optimal stiffness for the bike’s rear triangle, while vertical compliance is greatly increased also.

Furthermore, since the Cento10NDR’s main triangle is rigid, the seatpost and saddle never move in relationship to the bottom bracket, thus ensuring that maximum power transfer and pedaling efficiency is never compromised.

Wilier has designed the Shox with three different levels of stiffness, which increase based on size. For instance, the smallest size frame will come equipped with the softest density elastomer, while the largest frame will get the hardest. However, customers will be able to choose the density that’s right for them based on their weight and riding style.

According to Salomoni, there is about 3-4mm of travel in the Shox: ‘If you’re heavy about 5mm. It just cuts the micro-vibrations from normal riding.’

In addition to the ACTIFLEX suspension, the other major difference between the Cento10NDR and is regular road counter-part, the Cento10Air, is the geometry has been designed around more comfort, whereby reach has been reduced, while stack height has been increased – allowing for a less aggressive and more upright position.

Another key feature about the Cento10NDR, is the frame is compatible with either traditional caliper or disc brakes, wherein Wilier has created special dropouts that can be swapped-out depending which braking system is being used.

For example, in the case of caliper brakes, the rear dropouts can be used with standard quick-releases with 130mm hub spacing, while there are disc brake ready dropouts that can be easily swapped-out to increase spacing to 142mm and accommodate 12mm thru-axles.

According to Wilier, the Cento10NDR will be available in a range of “builds”, to include Dura-Ace Di2 hydraulic groupset with Mavic Ksyrium Pro Exalith wheels, SRAM eTap and Mavic Cosmic Elites and the more cost effective Ultegra Di2 groupset with Shimano WH6800 wheels.

According to Wilier, the Cento10NDR will be available in the US starting in September, with complete bikes topping out at $7999, and framesets sold separately at $3499.