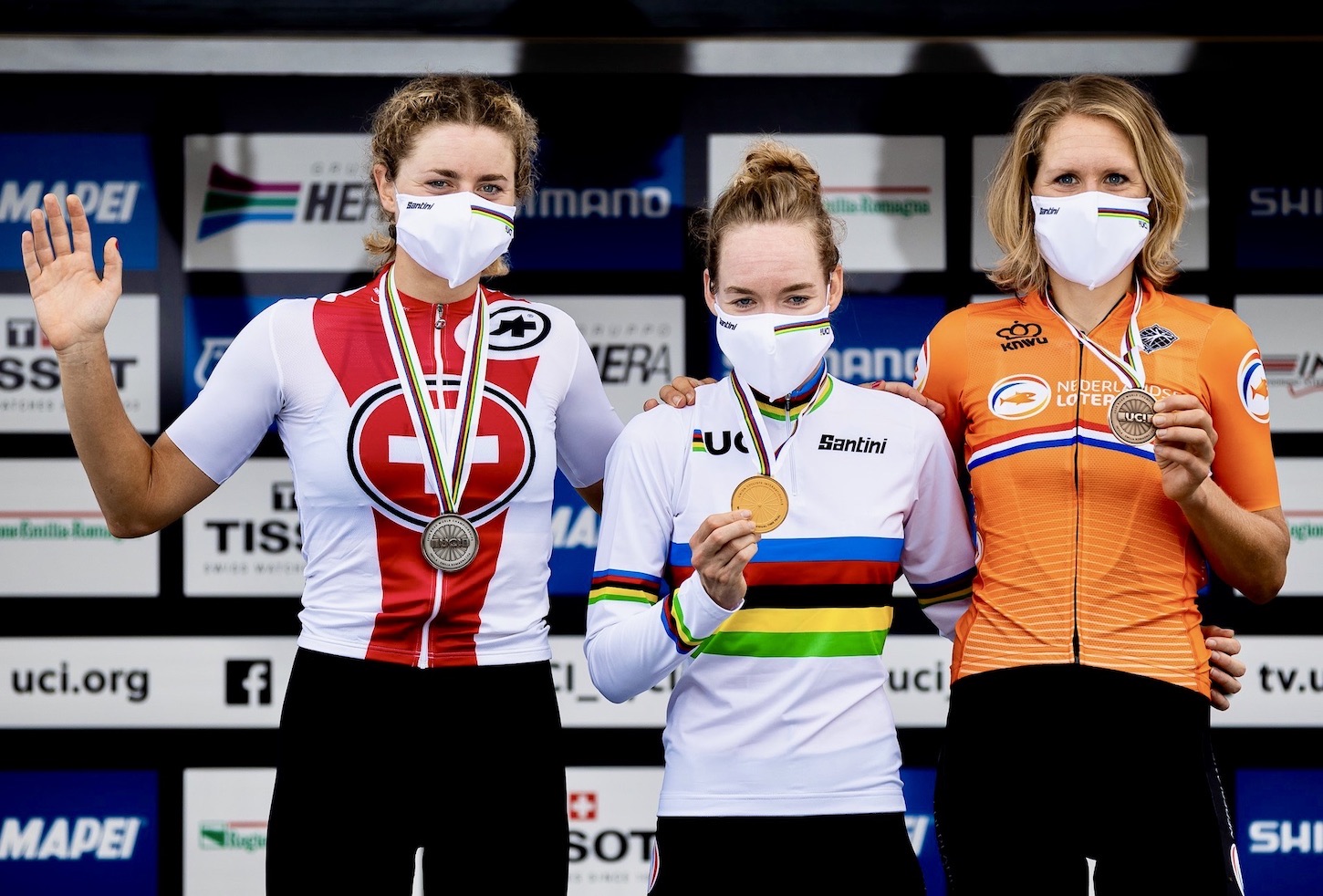 Reusser herself usurped Van Dijk in dramatic fashion just before Van der Breggen finally sealed victory in Imola in a winning time of 40:20.

But, it was van der Breggen who would take the rainbow jersey after placing second in the event on four previous occasions.

Having just won the Giro Rosa for the third time, it was another memorable triumph for the Dutch star, who negotiated the 31.7km route expertly to top the podium.

“I said to my coach ‘please don’t tell me any split times’,” said the 30-year-old “I just wanted to go as fast as possible. I only heard on the finish line that I had won. It was incredible.”

Sadly, today’s event also saw defending champion Chloe Dygert suffer a very a horrible crash as she went over a barrier and down a bank at the side of the road.

The 23-year-old was setting the pace again and looked on course for gold, but lost control on a corner. Her team car and paramedics immediately came to her aid.

“All we know is that she is conscious and talking,” USA Cycling said on Twitter. “More updates to come.”

In the meantime, Britain’s Lizzie Banks briefly led proceedings as she recorded a time of 42:42 before that mark was easily trounced by almost a minute by Denmark’s Emma Cecilie Norsgaard Jorgensen in 41:42.

The 51 riders from 39 countries competed in today’s UCI Individual Time Trial World Championship race on a fast and flat 31.7km course around Imola. Compared to last year’s hilly route, the 2020 edition was a challenge between specialists against the clock. The course started and ended at the Autodromo Enzo e Dino Ferrari, without any significant climbing – just 200 meters.

The first part was very fast reaching Casalfiumanese and then Borgo Tossignano. After the only intermediate split time at 14.9km and passing through Codrignano, did the riders faced a slightly more technical road and two short ascents before returning to the Autodrome.

The 20-year-old track specialist and double 2020 national Barbados champion (road and time trial) Amber Joseph was the first to start, followed 1:30 later by one of the oldest competitors, 42-year-old Margret Palsdottir from Iceland and two time ITT UCI World Champion (2008 and 2016) Amber Neben from the USA, at 45 years old.

After the first hour, Emma Cecilie Norsgaard Jorgensen from Denmark had the best time with 41:42′ at an average of 45.607km/h, 9 seconds  quicker than Germany’s Mieke Kroger and Audrey Cordon Ragot from France at 31 seconds.

Australia’s Grace Brown later stopped the clock on 41:21 (45.991km/h average) becoming the new leader some minutes before Dygert destroyed the best time at the intermediate split time, establishing a 26-second lead over Reusser and 36 seconds over Van der Breggen.

Unfortunately, the American rider fell shortly afterwards, managing to restart, but losing the chance to defend her rainbow jersey.